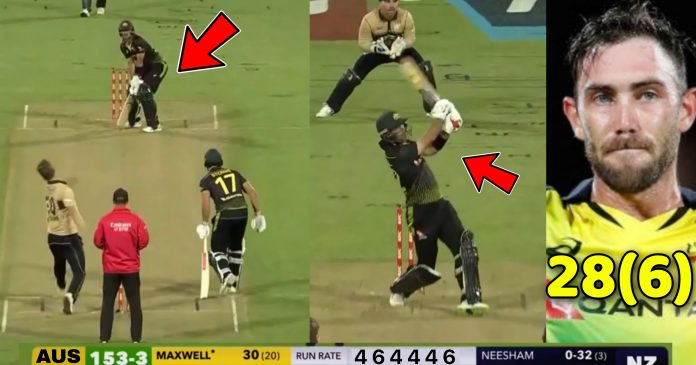 Glenn Maxwell is considered one of the most destructive batsman going around. His clean and flat hitting is a skill many would like to emulate. When he is in the zone, bowlers ask for cover and the spectators look for a place to hide.

The Big Show, as he is fondly called by his team mates for, his huge hits was on fire again today. In the third T20 game vs New Zealand, Maxwell again showed just why he is the most dangerous Australian batsman, in limited overs, especially in T20!

When Maxwell came to the crease, Australia’s score was 89-2 after 10 overs. Initially, he went slowly, as it took him few balls to adjust to the pace of the wicket, at Westpac stadium, Wellington.

Once he got set, all hell broke lose. The carnage started when, Jimmy Neesham came to bowl the 17th over of the innings, with the Australian score at 153-3. Maxwell has just started to gain momentum, but what followed was a Big Show special.

Maxwell just blasted the poor bowler, for 28 runs in the over, while completing a 50 off just 25 balls. The over put Australia on track for a score, of more than 200 when they looked to settle somewhere around 180.

The 17th over of Neesham to Maxwell went some thing like this-:

Ball 1 – Short and wide delivery was fiercely square cut over point for a 4.

2nd Ball – Slower short delivery was pumped by Maxwell over mid wicket for a 6.

Ball 3 – An off cutter length delivery was drilled straight down the ground for a 4.

4th Ball – A full toss was hit again over the bowler’s head for a one bounce 4.

By now, 18 runs had come of the first 4 balls, but there was more punishment for the bowler.

Ball 5 – Another length ball was carved between cover and point for a 4! This also brought a 50 for Maxwell of a mere 25 balls.

Last ball – A short venom less delivery was hoicked by the batsman, over deep square leg for the second six of the over.

A total of 28 runs were pummeled in the over by Maxwell!

Maxwell was finally dismissed, after making a 31 ball 70. His innings had 8 fours and 5 sixes. This blitzkrieg was responsible for Australia ultimate score of 208-4, which might well be a match winning one!

Watch the video of Maxwell’s 28 runs over, here-:

Watch : Funny moment as Shardul Thakur walks on pitch without waiting for anyone....