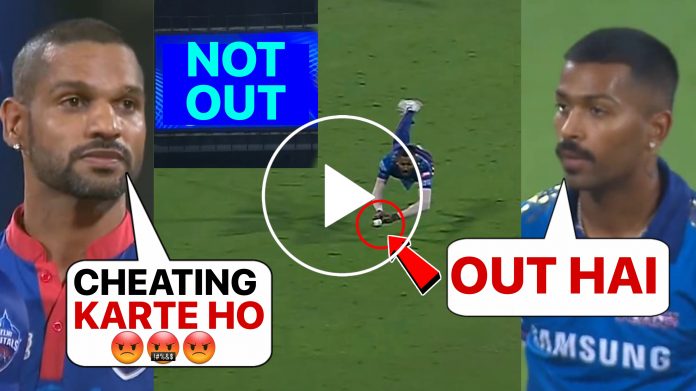 It was a comfortable victory, for Delhi Capitals against Mumbai Indians, at Chennai. The Delhi Capitals are now placed at second position in the Indian Premier League. Ahead of them is Royal Challengers Bangalore. They have the same number of wins but at a better run rate.

The target of 138 was overhauled by Delhi in last over without any hiccups. Shikhar Dhawan was the top scorer for Delhi with 45 runs in 42 balls. However, there was one moment which happened to Dhawan and became a source of controversy.

It was in the first over of the Delhi innings. The openers Shikhar Dhawan and Prithvi Shaw had come out to bat. Dhawan hit a four on the third ball to show his intensions. But on the last ball of the over, Boult came back in style.

It was a delivery that got stuck into the pitch. Dhawan tried to flick it into the leg side. But he got beaten by the pace of the ball and the ball flew in the air towards short cover. The ball was quickly dying before Hardik Pandya intervened.

Pandya takes an amazing catch. Or does he?

The brilliant fielder dived full length in front oh him and caught the ball in what appeared to be an amazing catch. Initially, it looked as if the catch was clean and Pandya had taken a blinder. However, the umpires were not convinced and they sent the decision to the third umpire.

Since, there is no any soft signal of the umpire is this edition of IPL, umpires did not give any on field decision. When the clip went to the third umpire, it was found that the fingers of Hardik could not have been truly underneath the ball.

It appeared that when Hardik was diving forward to take the catch, the ball might have just touched the field before Pandya could take it cleanly. After repeated replays of the catch, it was finally concluded that the ball had grazed the field and the catch was not clean.

So, Dhawan was given not out and he stayed at the wicket.

Watch : 5 Indian uncapped players who can wear the blue jersey on Sri...