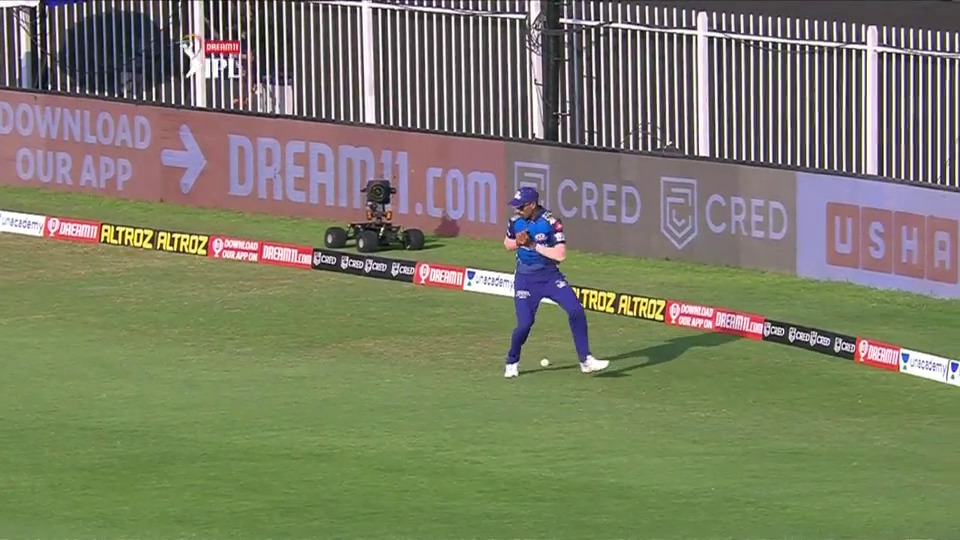 Mumbai Indians cricketer Hardik Pandya is one of the best fielders in world cricket. He has earned a name for himself for his athleticism on the field over the past few years.

However, the talented youngster dropped a dolly against Sunrisers Hyderabad at Sharjah. The incident happened during the eighth over in SRH innings. Kieron Pollard came on to bowl his first over and dropped a slower short ball onto Manish Pandey.

With the pressure to score early runs, Manish Pandey pounced onto the ball. But he could only hit it as far as deep point. Hardik Pandya who was fielding at the boundary was quick to react. He covered a lot of ground to reach to the ball but failed to take the catch.

One reason could be the sun hitting straight into his face and he lost the ball in the air. Since he is wearing cooling glasses to reduce the effect of sun, it should be considered a drop. Considering the huge fielding standards of Hardik Pandya, it is a sitter to drop.

On the other hand, Pandya was very disappointed with himself. Apart from the missed catch, the ball rolled onto the boundary which added more to his woes.

Here is the missed catch

Mumbai Indians decided to bat first and scored an impressive 208 in their 20 overs. Krunal Pandya’s 4 ball 20 run cameo helped the team reach over 200. Also, the team will be happy to see Quinton de Kock back in form. The South African had struggled throughout the season so far. But he scored his first IPL fifty this season.

Hardik Pandya and Kieron Pollard continued their rich vein of form against SRH as well. Both the players have found their groove and are playing crucial knocks for Mumbai since the start of IPL 2020. But missing Hardik Pandya in bowling is definitely a huge weakness in this side’s quest for title.

Meanwhile, Sunrisers got a strong start to their innings. David Warner is going strong at the time of writing and it could be a very close contest. But the wicket of Warner will definitely make it easy win for Mumbai Indians. Since Sunrisers middle order is not proven yet, it will be a huge task for the youngsters to score at more than 12 an over.

Jasprit Bumrah and Trent Boult could prove to be the difference between the sides as Sunrisers leaked runs in the final overs with the absence of Bhuvneshwar Kumar.

Watch : Viral video of Virat Kohli dancing on the ground.