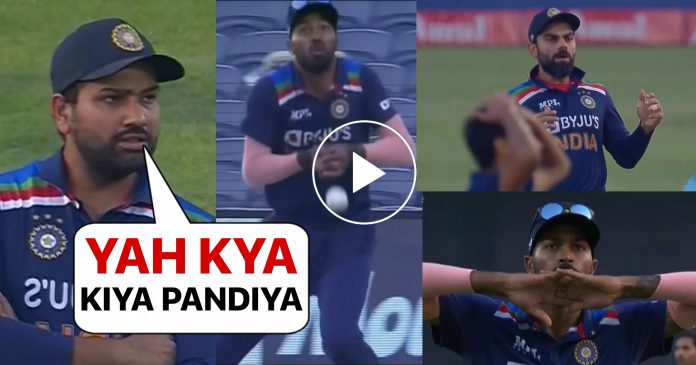 Hardik Pandya is one of the best fielders not only in India but in the overall international cricket. His sensational work in the field, be it saving runs by swiftly diving around or taking breathtaking catches, Pandya is at par with Ravindra Jadeja.

However in one freak incident, Pandya defied the expectations with him. He dropped the simplest of catch which left everyone in shock.

The moment happened during the fifth over of the English innings. Chasing 330 runs to win, England got off to the worst possible start. Both the openers were dismissed cheaply. It was Bhuvaneshwar Kumar who took the wickets of both the batsmen.

Ben Stokes coming in to bat at number 3, looked a bit out of touch since the start of his innings. While trying to up the tempo during Bhuvi’s over. Stokes came down the track and played a shot with straight bat.

However, the ball just went up in the air rather than going over the bowler’s head for a six. As the ball flew in the air, two fielders came from their respective positions under neath it to catch the ball. They were the Pandya brothers from mid on and mid off.

But then, Pandya dropped the catch in a rather elementary way. He had everything covered but at the last moment, the ball just burst through his hands. It was so unexpected and shocking that no one could believe it.

The skipper Kohli and vice captain Rohit just covered their faces with their hands. While, the Indian bowling coach too watched in disbelief as their mouth was left wide open as soon as the catch fell.

Meanwhile, Hardik Pandya also could not quite believe what he had done. He just turned his back and walked away from the place in unconvincing way.

Thankfully for the Indian fans and the Indian team, the dropped catch would not prove to be too expensive. T Natarajan dismissed the south paw after few overs. He could add only 20 runs to it. Stokes made 35 runs in the final ODI as his long tour came to an end. He is the only player from the English side to take part in every match of the tour!

Watch the moment here when Pandya dropped the catch: