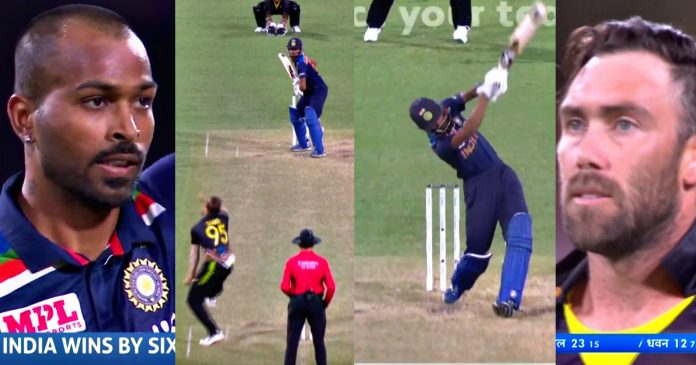 The talented all rounder did not look in good touch, particularly at the start of his innings. But as he faced more deliveries, he started looking dangerous.

India need 14 runs in the final over while chasing a massive 195. However, Hardik Pandya kept his cool. He scored 2 runs in the first ball after slogging the behind the deep square leg.

He then heaved a massive six over wide long on. But Daniel Sams came back strong with a dot ball. India needed 6 runs from 3 balls. Sams bowled another length ball on the off stump. Hardik Pandya again launched the ball into deep mid wicket stands. India won the match comfortably with two balls to spare.

That's as clutch as they come from Hardik Pandya! 💥💥💥

Earlier in the match, Australia asked to bat first and stand in skipper Matthew Wade looked in great touch. He scored at an impressive rate inside the powerplay overs and have Australia the ideal start.

In the process, he scored a fifty. Once he is dismissed, in form Steve Smith took charge and got ample support from Glenn Maxwell and Moises Henriques. Australia posted an impressive 194 in their 20 overs.

Natarajan once again impressed with his bowling as he is already making huge in roads into Indian bowling unit. Asked to chase a massive 195, Indian openers gave a great start to set the platform.

KL Rahul was dismissed inside the powerplay. But Shikhar Dhawan continued his stroke play. In the process, Dhawan scored his first T20I fifty in this series. On the other hand, Virat Kohli also increased his scoring rate as India looked within reach.

Once Virat Kohli was dismissed, Hardik Pandya took responsibility to finish the innings and he got some great support from Shreyas Iyer. India will now play the third T20I at Sydney on Tuesday.

With series already in the bag, expect Virat Kohli to make few changes to his side. This win also meant India have now won 9 consecutive T20 matches on a row