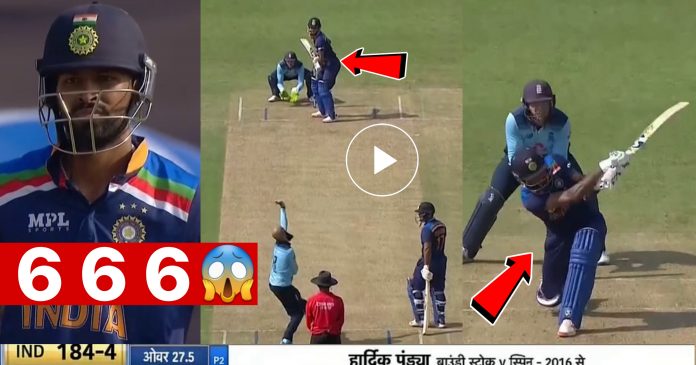 The series finale of the India-England ODI series is being played at Maharashtra Cricket Stadium in Pune. Both the teams are at 1-1. Whoever wins the last game will win the series 2-1. England have won the toss and decided to field first. The decision did not prove to be fruitful. Indian opening duo of Dhawan and Rohit added 103 runs for the first wicket.

However after that, the English bowlers struck quickly and wickets came quickly. Four wickets fell within a span of 54 runs. A score of 103-0 became 157-4 in no time. Both the openers departed after getting set while skipper Kohli and number 4 KL Rahul went for 7 runs each.

India were again in a spot of bother at 157-4 and a score of 350 looked distant. Then, Rishabh Pant and Hardik Pandya, two of India’s most explosive batsmen joined forces. Moreover, they took the attack back on English bowlers and forced them to go defensive. The pair added 99 runs in a little over 11 overs.

Both the batsmen were absolutely severe against spinners. Both the spinners Adil Rashid and Moeen Ali were caned mercilessly by the batters. The batsmen hit them for sixes after sixes as India’s run rate increased quickly.

Moeen Ali, who was quite economical in both the first two games was again proving to be unhittable. That is when Hardik Pandya intervened. In the 28th over of the innings, Ali came to bowl to Pandya and Pant.

The first ball of the over was a flighted one and Pandya was up for it. In one clean swing of the bat, the ball disappeared over sight screen for a six. Two single and a dot followed before the caning started again.

Fifth ball of the over was again darted in by Ali as Pandya went down on knee and slogged it out of the park over cow corner for another huge six. On the last ball, Pandya smoked another six on a harmless delivery. It was pumped over deep square leg!

In all, Pandya hit three sixes in an over of Moeen Ali. Such was the effect of this batting was that Buttler took Ali out of the attack and the bowler did not bowl in the match again.

Watch the eventful over here: