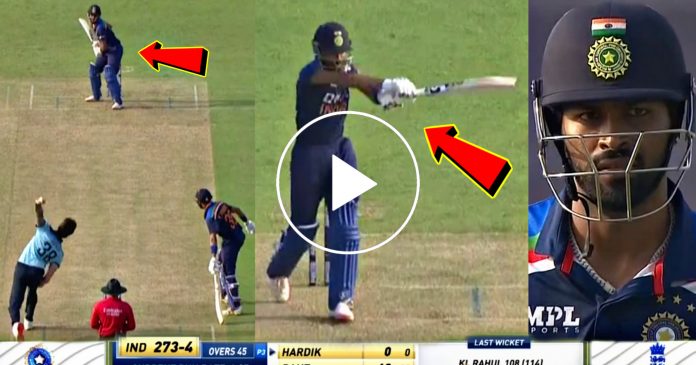 Hardik Pandya is the best seam bowling all-rounder in India by a distance. He can do what very few can do in India right now. He can bowl nippy seamers and get wickets in middle overs and he can field like lightning on the ground. However, his most destructive trait is that he can smash the leather out of the ball from the word go!

If India needs to score at a rapid pace, Pandya is the man the team management believes in. More often than not, he keeps the faith of the team management intact in him by doing exactly what was asked to do. Pandya hit a 16 ball 35 as he hit 4 sixes in his cameo.

The lean athlete came to bat at number six. He arrived at the crease when KL Rahul fell, after completing his century as he was trying to score quickly. Pant was already hitting them well enough, and Pandya needed to support him.

The first ball Pandya faced was of Sam Curran, who was bowling a medium pace. This is just the pace the batsman wanted, as he smashed Curran over square leg for a first ball six! It was a short delivery by Curran and Pandya just launched into him. Three balls later, Pandya again dismissed the bowler for a huge six in the same area.

This shot was so much impactful that even, Pandya’s brother applauded it in the dressing room by jumping up and down. The bowler had missed his Yorker, as Pandya needed no second invitation.

In the next over, more variety of Pandya’s hitting was seen, when another slower ball was thumped over mid wicket for another six. In the 49th over of the innings, Pandya hit his 4th six.

Tom Curran bowled one into his area as Pandya just struck it, with an authority for a flat six. It hardly left the ground but still travelled over long off!

Pandya was finally dismissed by Reece Topley in the last over, when he tried to hit his 5th six. He misread a knuckle ball and mistime the shot, before being taken by the fielder in deep. It was a perfect cameo in collaboration with Pant’s innings, that was similarly destructive.