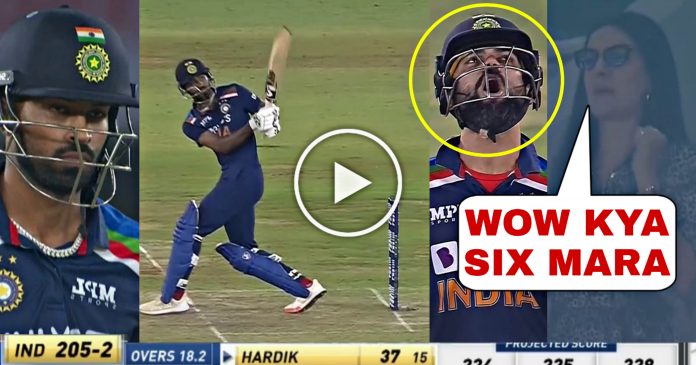 An injury kept him out for quite a long time, Pandya made a return to Indian team in Australian tour. He played some match winning innings and marked his return in style. He did not get to play a single game in the test series. So naturally, all eyes were on him in the T20 series.

However, Pandya mostly struggled in the first 4 match. England attacked him with express pace and Hardik could not adjust with that. Consequently, he scored at just above run a ball. That sort of batting wasn’t expected by his fans as they expect him to thump the bowlers like he does in IPL and at death for Indian cricket team.

Now, in the last game of the T20 series, Pandya showed that why they say, form is temporary but class is permanent. Pandya came at the fall of Surya Kumar Yadav who had played brilliantly for his 32.

Hardik though, started slowly but then changed gears drastically. His first boundary scoring shot was a ramp off Jofra Archer for a four. Hence, it went over the keeper’s head for a four. The next over bowled by Wood also saw two back to back fours by Pandya.

The 18th over of the Indian innings saw some much required fireworks from Pandya. He was well set and batting nicely, although the six was still to come. The wait ended in this over.

First ball of the over was a full delivery and down the leg side. The batsman took full toll of it and flicked the bones out of it for the first of the six. Virat Kohli who was standing at non strikers end appreciated the shot by gesturing in a wide grin.

The next ball of the over was again on a leg side but a short delivery. Pandya rocked back and nailed the pull shot for a gigantic six! Even his wife Natasha Stankovic stood from her seat in the stands and clapped many a times at the shot.

Two sixes in two balls meant the Pandya of old had reappeared and was making the English bowlers pay dearly.

Watch: Shardul Thakur Starts With A Six and Hit 67 runs In 4th Test...

Watch : Prithvi Shaw and Surya Kumar Yadav to travel to England in unbelievable...