England have defeated India in the first T20 game by 8 wickets. It was a one sided victory by any standard of cricket. England chased the target of 125 losing just 2 wickets and in 15.3 overs. 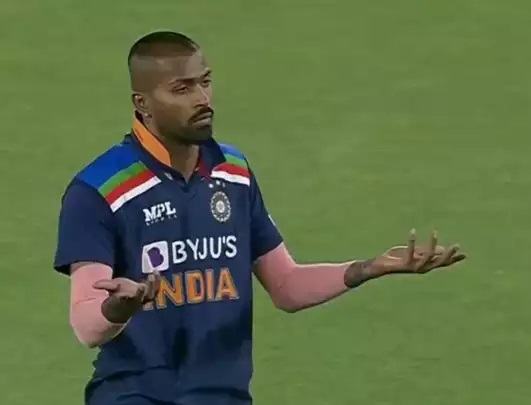 Earlier, they had restricted India to an ordinary total of 124-7. None of the players bar Shreyas Iyer could score freely against English bowlers. He was the top scorer for India with 67 runs off just 48 balls. Other star players like Pant, Kohli, Rahul and Pandya disappointed everyone.

In reply, England was at ease with the chase. They came out with intent and chased down the target very easily.

One moment which happened in the match was of Hardik Pandya. The mercurial all rounder could not much with the bat as was dismissed by Jofra Archer who bowled with pace and seam in excess of 145.

The English opener Jos Buttler was looking to dominate against the spinners and was continuosly using his feet. Pandya was standing at long on when Buttler hit Axar Patel over him at long on. His shot comfortably cleared the fielder as it went into the stands. The ball was taken by someone from the crowd. The people standing in the crowd started to take the ball by trying to snatch it from each other in a rather playful way. There were so many people fighting for the ball that it looked hilarious and comical.

However, amidst all these, Pandya was still asking for the ball from the crowd. He gestured to them about giving the ball back to him so that the play can continue. But the crowd paid no heed to Pandya. At this moment, Pandya lost his cool and reacted rather angrily.

An angry Pandya is very rare and hardly seen onto the cricket ground. After this, the crowd gave the ball back to him who then threw the ball back to umpire. The umpires sanitized the ball before giving it to the bowlers to play with it.

Hardik Pandya has been playing international cricket for close to 5 years now but no one saw him angry like this on the field.

Amidst all the skills which Pandya possess, this was a new variation which his fans saw. May be in the upcoming IPL, people would see more of this newly found habit of Pandya.

Watch the particular video of Pandya losing his cool and getting angry at crowd: