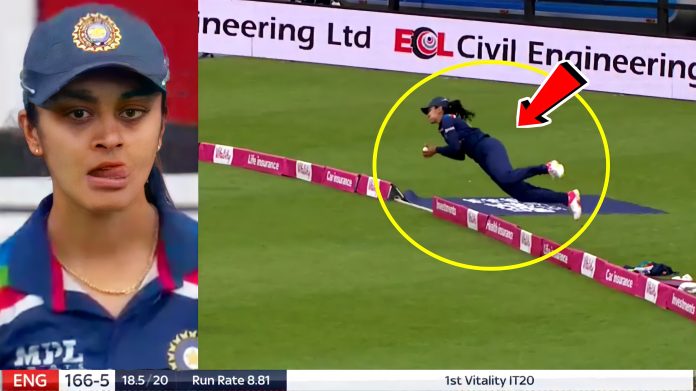 India women are facing England women in a T20 series of 3 matches. The test series between the two teams was a draw. It was followed by an ODI series which England women won by 2-1. Now the two teams are up against each other in a T20 series which consists of 3 games. Accordingly the first T20 between them was played in County ground, Northampton.

It was Indian team who won the toss and elected to field first. The decision to bowl first did not prove to be great decision as England openers got off to a great start. Tammy Beaumont and Danni Wyatt added 56 runs for the first wicket. Nat Sciver the number 3 batter topped the score card as she made a fifty. Moreover she smashed her way to 55 in just 27 balls and took the Indian bowlers to the task.

The wicket keeper Amy Jones chipped in with 43 as England finished with a strong total of 177 runs on the board. For India it was Shikha Pandey who was the pick of the bowlers. She took 3 wickets for 22 runs in 4 overs.

Chasing a target of 178 runs, India had a poor start. The opener Shefali Verma was dismissed for a duck on the second ball of the first over. However Smriti Mandhana played some scintillating shots as she made her way to 29 in 17 balls. Furthermore it included 6 fours. Unfortunately for the Indian team just when she was looking good, Nat Sciver got her wicket. The skipper Harmanpreet Kaur disappointed again as she gave a catching practice top the fielder at mid on for a score of 1.

At the fall of her wicket, India slipped to 47 for 3. The Indian team had reached 54 for 3 when it started to downpour heavily. To make matters worse, India were found 18 runs behind the par score of DLS. With no chance of rain getting stopped, the match was called off. Hence England were awarded the match by 18 runs on the basis of DLS method.

Amidst all this, there was one magical moment in the match during the Indian fielding. The young Harleen Deol took one of the most stunning catches ever taken in the history of women’s cricket. Such was the brilliance of the catch that it left everyone present in the ground in total awe.

It was the penultimate ball of the 19th over. Shikha Pandey was bowling to Nat Sciver who was looking to score quick runs. Accordingly the batter smashed a full length ball towards long on and it appeared that the ball was heading over the ropes. That is when Deol intervened with a memorable effort.

Standing at the boundary line, she timed her leap to perfection and caught the ball with both hands. However the momentum was taking her over the ropes. Instantly the fielder threw the ball back in the infield before stepping over the ropes. Furthermore Deol turned back quickly and then dived full length over the ropes and into the field while taking the catch mid air! She was parallel to the ground as the catch was completed.

Watch the video of the catch :

A fantastic piece of fielding 👏

Watch Rishabh Pant predicts a wicket like MS Dhoni. Gets a wicket on the...