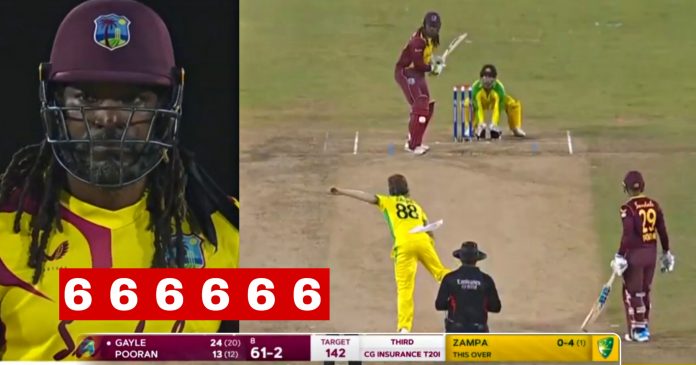 The Universe Boss Chris Gayle marked his return to form in some style. The dangerous left hander from Jamaica was struggling for runs for quite some time in cricket. However that all changed in the third T20 between Australia and West Indies. Gayle blasted a 38 ball 67 runs that included 7 colossal sixes. He reserved a special punishment for medium pace seamer Josh Hazlewood and leggie Adam Zampa.

Both the bowlers bore the brunt of Gayle’s carnage as they were dispatched to all parts of the park. The rampage of Universe Boss began as early as the second over itself in the West indies chase. Josh Hazlewood was bowling and on the third ball Gayle bashed the bowler over long on for a six as he made a bit of room.

It was followed by three consecutive fours to the right hander seamer. Fourth ball was a stand and deliver stuff as Gayle flicked the ball powerfully through square leg. The next ball was an action replay as again the delivery was bashed in the leg side. On the last ball of the innings a full ball was crashed over bowler’s head for third successive four. Such powerful was the shot that Hazelwood barely had time to react. Moreover he considered better to get out of the way of the shot rather than trying to take the catch.

Old Horse back in form! 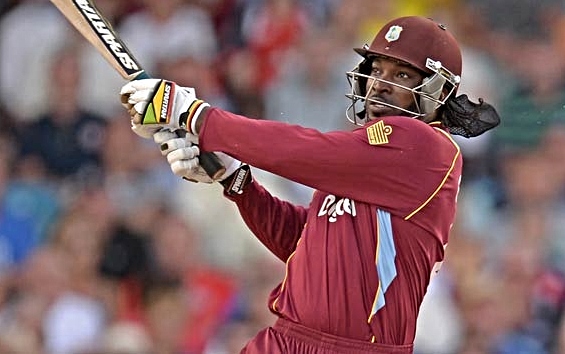 Gayle’s next target was leg spinner Adam Zampa. The leggie got a sign of things to come in the 9th over. On the very first ball of the over, Gayle blasted Zampa over long on for a gigantic six. Moreover that shot brought 14000 runs for the Universe Boss in T20 cricket.

In the 11th over of the innings, Zampa faced the full force of Gayle’s insane hitting prowess. The third ball of the over was an ordinary long hop. Hence the southpaw went on to backfoot and smoked it above mid wicket for a huge six.

The next ball was a full delivery. Once again Gayle used that long handles and pummeled it over long on for second successive six. The fifth ball of the innings was delivered on leg stump. Consequently the veteran batsman heaved it again over square leg via a slog sweep. The shot was so huge that the ball went outside the stadium. It also brought Gayle’s fifty in T20I cricket since 2016.

The innings of Universe Boss ended after making 67 runs in 38 balls. It included 7 sixes and four fours.

Watch : 12 overseas players who would miss the second part of the IPL...