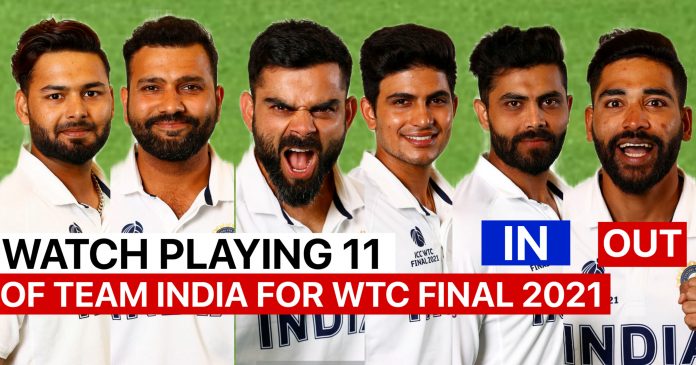 Team India has announced their playing 11 for the all important final vs the New Zealand starting tomorrow. After declaring their 15 member squad a couple of days ago, Indian team management went further ahead and unveiled their 11 set of players. Hence, these would take on New Zealand in the marquee clash at Ageas Bowl, Southampton.

The team declared by India which will take the field tomorrow is as follows :

While the batting line up of India for the top 5 was settled, it was the lower order and bowling conundrum which India was facing. However, as expected Indian team have gone with luxury of 5 bowlers. This includes Ravindra Jadeja as all rounder and three pacers.

Rohit Sharma and Shubhman Gill will open the innings followed by Cheteshwar Pujara at number 3. Then Virat Kohli thee skipper will take the crease at four and Ajinkya Rahane would join him next at 5. Ravindra Jadeja will play as an all rounder and he bats at number 6 followed by explosive wicket keeper batsman Rishabh Pant. Ravi Ashwin is going to be India’s leading spinner in the test as the three pacers are Ishant Sharma, Jasprit Bumrah and Mohammad Shami.

4 specialist bowlers plus all rounder for India

There was a battle between Ravindra Jadeja and Hanuma Vihari for batting at number 6. Jadeja is an all rounder while Vihari brings more solidity at that position. In the end, Jadeja won the slot for his electric fielding and controlled left arm bowling as fifth bowler.

The other competition for a slot was between the pacers. While Bumrah is pace spearhead and selects himself, there was a two way fight between three pacers. They are Ishant Sharma, Mohammad Shami and Mohammad Siraj. A lot of former Indian cricketers had predicted that India would play Md Siraj ahead of Ishant on the basis of current form.

In the end, the experience of Ishant prevailed as he has more than 100 tests to his name. His other fast bowling partner would be Mohammad Shami, who would be playing a test match after close to 6 months. Shami last played a test in India’s tour of Australia. There, he was injured in the first test at Adelaide and was ruled out of entire test series.