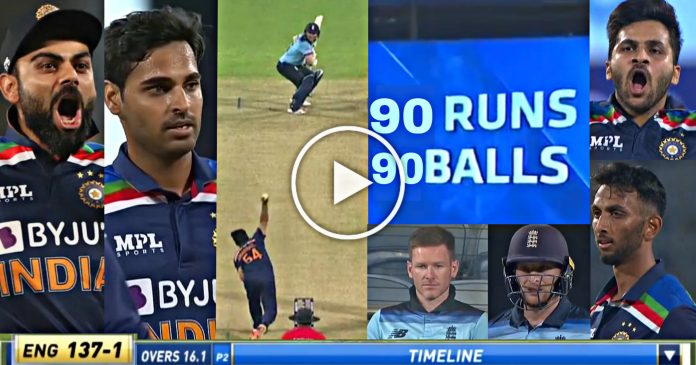 The first ODI match played between India and England ended in a thumping victory for India. This match was held at Pune cricket association stadium in Pune, Maharashtra. The English captain Eoin Morgan won the toss and elected to field first.

Indian openers Shikhar and Rohit gave solid platform to India as they added 64 runs for the first wicket. Rohit was then sent back to the pavilion by Ben Stokes. After that, Virat Kohli and Shikhar Dhawan then joined to form a partnership of 106 runs. Moreover, they had set India on course of big total.

But then, a mini collapse meant India were reduced to 169-1 to 205-5. Dhawan missed his 100 by just 2 runs as he fell on 98 runs. Then with India losing half their side and in trouble at 205, the debutant Krunal Pandya and KL Rahul took control of the situation. They pummeled the English bowlers everywhere on the ground.

The two never let the pressure to get to them as they added 112 runs in just 57 balls. This partnership ensured India finished with a strong total of 317-5. Both KL Rahul and an emotional Krunal Pandya hit their respective fifties.

For India, Shikhar Dhawan was the top scorer as he made 98 in 106 balls. For England, Ben Stokes was the pick of the bowlers by taking 3 wickets for 34 runs. He was also the most economical bowler for his side.

In reply of a big target of 317, England openers got their side off to a rollicking start. Jonny Bairstow who had a torrid run in the test series looked in blistering touch. He smashed the Indian bowlers mercilessly and hit boundaries at will. Jason Roy too supported him in best way possible.

The duo smashed 135 runs in just 14.2 overs. When they were batting, it appeared that they were not playing an ODI but a T20! Few more overs of them batting together and it could have been curtains for India.

England off to sensational start

However, this could not happen. The debutant Prasidh Krishna got the better of Jason Roy by catching him out at point. Roy was gone for 46 in 35 balls. This was just the opening India needed as in an astonishing phase of play, England collapsed like a pack of cards.

After getting the wicket of Roy, Krishna then dismissed number three Ben Stokes. From there, Shardul Thakur took over. He sent back Bairstow, Buttler and Morgan to break the back of English middle order in just two overs. At 176-5 in 25th over, England were left playing catch up cricket for the remaining period of match.

Sam Billings and Moeen Ali tried to give some stability to England but to no avail. Krishna returned to snare Billings and after that it was just a matter of time for the results. The last wicket to fall was of Tom Curran who spooned a catch to deep third man on the bowling of Prasidh Krishna.

Jonny Bairstow was the highest scorer for England with a 94 in 66 balls. Prasidh Krishna, the debutant was the best Indian bowler on display as he took 4 wickets while conceding 54 runs in 8.1 overs.

Shikhar Dhawan was adjudged the man of the match for his 98 runs.

Watch : India playing 11 for the second T20 vs Sri Lanka