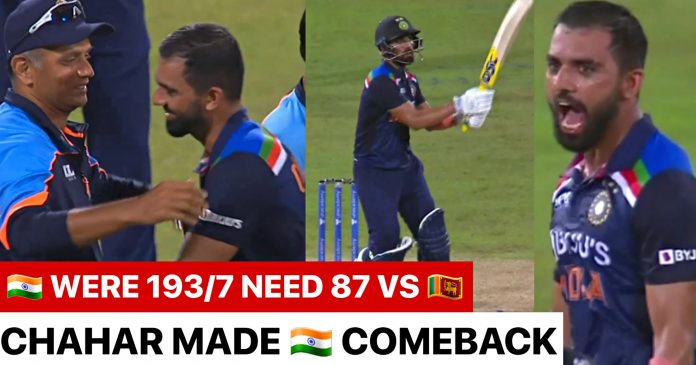 India beat Sri Lanka in an epic nail biter by 3 wickets with 5 balls remaining. The hero of the match was Deepak Chahar. He had a field day with both bat and ball. First he took 2 wickets with the ball in 8 overs. After that he played a brilliant innings of 69 unbeaten in 82 balls that took India to victory.

At one stage India looked down and out at 193-7. However then Bhuvaneshwar and Chahar added 84 runs for eighth wicket to win the match and series for India. With this victory India takes an unassailable 2-0 lead in 3 match series.

For Sri Lanka, Wanidu Hasaranga was the pick of the bowlers. He took 3 wickets in 10 overs and gave only 37 runs.

Prithvi Shaw was the first wicket to go for 13 runs. He was followed by Ishan Kishan who made just 1 run. Shikhar Dhawan too was dismissed when he was LBW of De Silva. Hence India were left at 65-3.

Surya Kumar played well for his 53 but was dismissed soon. He was caught LBW to Lakshan Sandakan for a 53.

After that Bhuvaneshwar and Chahar took the initiative for India’s victory. It came down to last 2 overs when India required 15 runs to win.

On the first ball of the 49th over, Bhuvaneshwar took a single. This brought Chahar on strike who smashed a four. A two and a single followed as Kumar faced the last ball of the over. Hence he decided to go aerial and got a boundary.

12 runs came of Chameera’s over and just 3 runs were required to win in last over. Hence Chahar finished off the match with a four on the first ball of Kasun Rajitha.

DEEPAK CHAHAR HAS DONE THE IMPOSSIBLE. TAKE A BOW! India win the match & the series! 🤩

IPL 2020: N Srinivasan Is Like A Father Figure To Me- Suresh Raina

Watch: Funny voices of Dhoni in IPL 2021 from behind the Wicket( part one)

Watch a funny moment by Sanju Samson at the toss that made even KL...