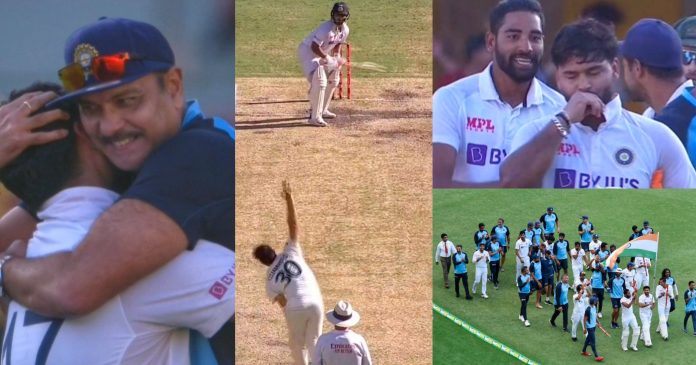 Rishabh Pant has played the most important innings of his career at Brisbane. He helped India register a historic win on the final day of the final test.

Pant has been India’s leading run scorer in the series despite missing out the first test. His inclusion has brought a freshness to India’s batting as he played two gritty innings in the series.

The 23-year old got some extraordinary support from Cheteshwar Pujara, who played another masterclass on the final day. Rishabh Pant was cautious throughout his innings and ensured that he stayed till the end to see India through.

Pant has made an unbeaten 89 and took calculative risks for the majority part of his innings. He was very disciplined as he went on his business and pushed India towards a record chase.

He got excellent support from Washington Sundar towards the end as the pair put up a 50 run partnership in no time. The southpaw increased the scoring rate as his innings went on and kept the target in check.

Despite losing key wickets in quick succession, Pant stayed calm and cool in a tough run chase. Australian bowlers gave their all on the final day but Pant stopped the hosts from winning this test match. He helped India sail to a win with still 3 overs left.

Here is the winning moment in Brisbane Test

Earlier in the day, Shubman Gill laid the foundation of India’s chase. He score an impressive 91 and kept India in the game. On the other hand, Pujara continued his resilient batting which helped players at the other end play with freely.

This series win is bigger than the one in 18-19 because India literally played with a second string squad. Australia will be disappointed with the way they went on with the things as they were firm favorites.

But India showed lots of resilience and grit as they churned out results from difficult situations. Despite losing many players to injuries, new players raised their hand and delivered for India in this series. It is a tough pill to swallow for hosts but there could be some changes expected post this result.