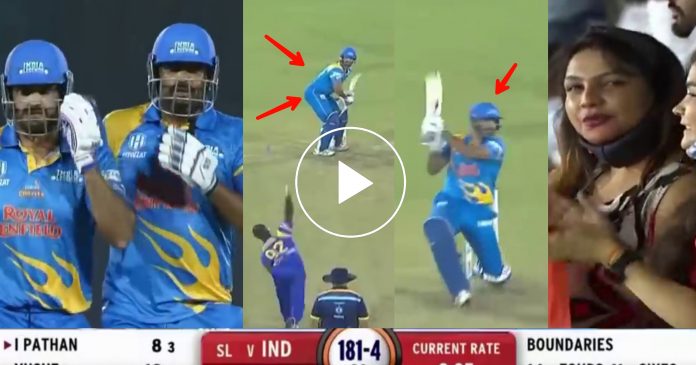 India legends is on the verge of winning the finals of the road safety league. Chasing a target of 182 runs, Sri Lanka are struggling at 92-4 in 13 overs. Both the openers and danger men Sanath Jayasuriya and captain Tillakaratne Dilshan had started off brilliantly. The two veterans added 62 in 7.2 overs and were looking in good touch.

However, before things could have got dangerous for India. Yusuf Pathan stuck with the ball. Pathan who earlier played an innings of 62, dismissed the skipper Dilshan. He was beaten by the bounce as he edged it to keeper.

After that, there was a lull in the runs of Sri Lanka legends team. Consequnetly, Chamara Silva, Jayasuriya and Upul Tharanga too followed their skipper back to the pavilion. All three fell while trying to up the speed of runs.

Earlier, India scored 181 on the back of half centuries from the explosive duo of Yuvraj and Yusuf Pathan. The two added 87 runs in 47 balls.

When these two were batting, it appeared India could even reach 200 runs. But then, Yuvraj fell as it reduced the run rate of India. Yusuf and Irfan then came together at the crease. Although, both of them struggled in the next 17 balls as only 17 runs came off it.

A last ball six by Pathan!

Even Yusuf Pathan could not time the ball properly as Sri Lankan bowlers bowled tight line and lengths. A score which could have been more than 200 was now in danger of being restricted under 175. When just five runs came in the last over off the first five balls, another low run over was on the cards.

However, Irfan Pathan had other ideas. Kulasekara ran in to bowl the last ball of the over. He already had bowled five good deliveries which fetched just five runs. Another good ball could have put India under less than 180 runs. But, he bowled a length ball which was right into the hitting zone of Irfan Pathan.

Pathan took no half measures on the last ball and, absolutely belted it flat over extra cover for a six! With that six, he made sure that some of the momentum will be back with India. Also, India crossed 180 runs which looks a match winning total.