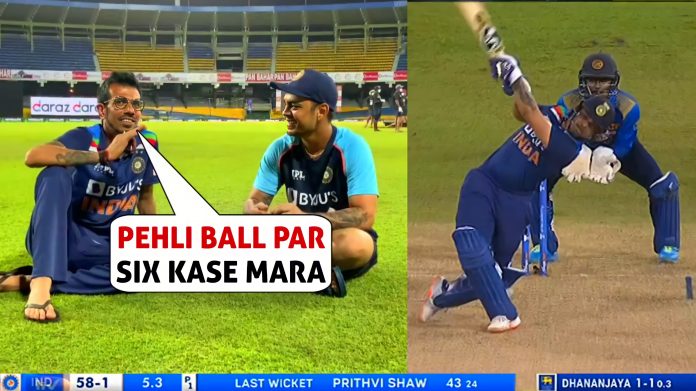 Ishan Kishan started off his ODI career in grand fashion. The explosive left hander smashed a six on the very first ball he faced thus announcing his arrival in style. An innings that lasted 42 balls, Kishan made 59 runs that has two sixes to his name. Furthermore the southpaw had also hit a 50 in his debut T20 game vs England.

After the game, Kishan was talking with his team mate Yuzvendra Chahal on the latter’s  ‘Chahal TV’. When asked about how did he manage to hit a six on the very first ball of his ODI career, the wicket keeper batsman replied :

When asked about the fear or pressure which he had while going to bat, Kishan said :

“I think practice is very important and since I was in good touch in the nets, I knew I just had to do the same thing in the match. I just knew that if I was getting the ball in my radar, I was going to go after it”.

No fear – The mantra for Kishan

Lastly he shared his experience about the emotions which he felt while receiving his first ODI cap. It read :

“I think for any player, there isn’t a prouder moment than when he is going to get his cap,” Ishan Kishan said about receiving his maiden ODI cap. I was just cherishing the moment, with some great people there and some good friends”.

Initially Kishan wasn’t even in the frame for playing the first match. Sanju Samson was all set to play as the designated wicket keeper batsman for the team. However at the last moment the latter was injured as he tore his ligament. Hence by the turn of fate, Kishan got an opportunity which he grabbed with both hands.