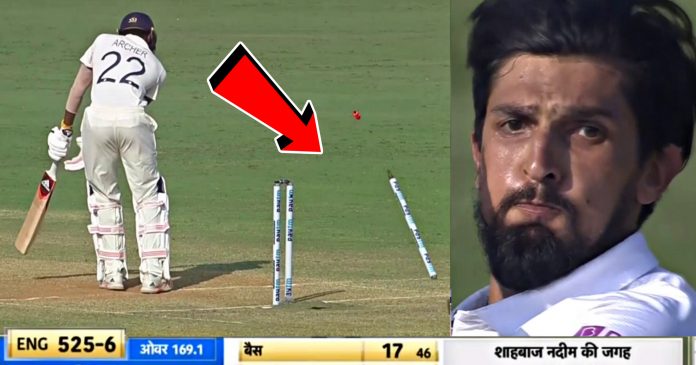 Veteran pacer Ishant Sharma was at his best during the fag end of second day’s play. The 32-year old was on fire with the old ball as he managed to reverse swing it with ease.

His brilliant lines have kept England batsmen guessing in the later stages of the day. Eventually, he reaped benefits by picking two wickets in two balls. He also managed to bring India back into the contest after a tough day on the field.

Ishant Sharma bowled a tempting line which Jos Buttler misread. He decided to leave the ball and it went onto hit the top of off stump. It was an error of judgement from England’s wicketkeeper but a lot of praise needs to go to Ishant.

He kept hitting consistent length and set him up well. On the next delivery, Jofra Archer had no answers to vicious ball from Ishant. Once again Ishant hit similar length but bowled it with an extra pace.

The delivery uprooted the off stump and Archer looked shocked having failed to put his bat onto ball. Ishant continued to cause trouble to English batters in the next few overs but could not get another wicket to his name.

And that's the new ball of the year

There has been loads of criticism for selecting Ishant Sharma ahead of in form Mohammed Siraj. But the veteran fast bowler managed to silence his critics with a good comeback on the day.

Ishant Sharma missed out on recently concluded Border Gavaskar trophy series due to injury. He made a comeback in domestic cricket and eventually made his way into the test side. Ishant has been a mainstay and a backbone to Indian pace attack in test cricket.

His two wickets on the day, has helped him reach 299 wickets. Playing in his 98th test, Ishant will be looking to get his 300th wicket tomorrow as England are still going strong after two days of batting.

India are on a backfoot after losing the toss. The pitch was flat but starting to do its tricks especially during the later stages of second day. It will be a herculean effort for Indian batsmen to outscore England’s score as the visitors are hoping to post a total close to 600 tomorrow.

Watch : Thrilling final over as India women beat England women to level the...