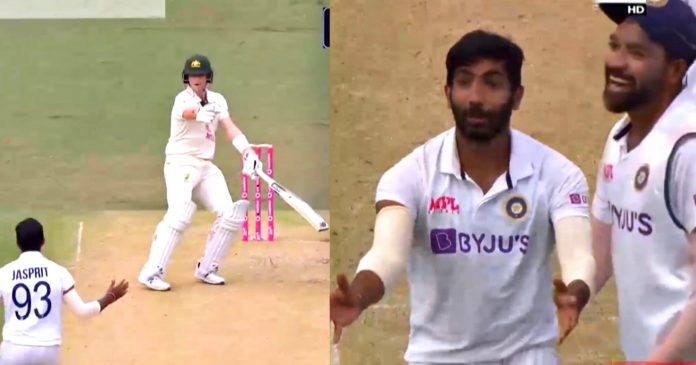 India and Australia are contesting a fierce test series so far. Both the teams have won one test each and the drama is slowly unfolding in the third test. There were numerous high points on the day for various cricketers.

Young Will Pucovski has managed to score a debut fifty on the day. He ensured that he grasped his chance after Rishabh Pant dropped him twice during his innings. On the other hand, pacer Navdeep Saini also got his maiden test wicket on his debut.

He bowled with pace but found little support from the SCG pitch. It was a hard day for Indian bowlers as Aussie batsmen managed to negotiate them with much more ease. They bowled their hearts but have little to show for their efforts.

Meanwhile, the moment of the day when Jasprit Bumrah imitated Steve Smith in a funny manner. Steve Smith have tried to off put Indian bowlers from their rhythm with his antics. Since the time he came on, Smith made some weird mannerisms. Bumrah who was at the other end of it, found it funny.

This is not the first time that Steve Smith was imitated by an Indian bowler. Previously in 2017, veteran bowler Ishant Sharma also mimicked Steve Smith for his antics. He mocked in a way that it became a meme in social media later.

Here is the video of Bumrah imitating Smith

Australia are in cruise control with the bat on Day 1. The batsmen looked at ease apart from odd blip and the pitch looks like a batting paradise. India will rue their missed chances especially the drops of Pucovski.

Both Marnus Labuschagne and Steve Smith showed their authority on the proceedings and made sure Australia are in a strong position at stumps. Bumrah went wicketless as batsmen played him out with caution. But India need some wickets and they need it quickly. If not, the chance to stay alive in this test match could prove tricky in the final 2 days.

Rain is forecasted in Sydney for the reminder of the test match. So it might come down to the lead in the first innings which could help the team with advantage.