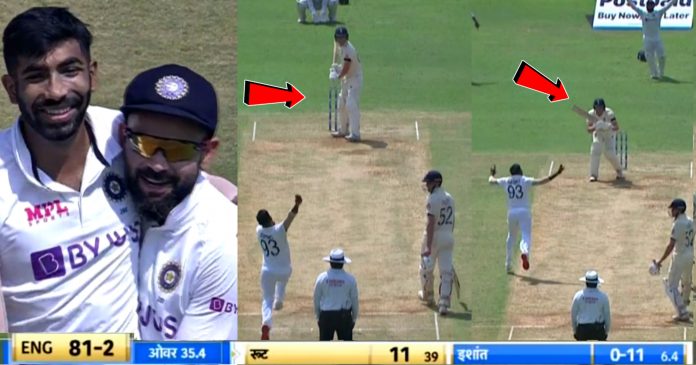 India’s premier fast bowler Jasprit Bumrah has finally got his maiden test wicket on home soil against England. The 27-year old had to wait three years before making his debut in a home series earlier today.

After making his debut in 2018, Bumrah has evolved into one of the best fast bowlers in test cricket. Unfortunately for him, he was forced to rest due to injuries in previous home series. But nothing could stop him today as he got his first scalp in India.

Bumrah has grew strength to strength over the years. He picked up 78 wickets in just 16 test matches prior to this match. The talented bowler was a vital cog in India’s recent dominance in test cricket overseas.

He also impressed with his bowling down under and played crucial role to win the historic series against Australia. Bumrah was supposed to get the wicket in his maiden over. Rory Burns edged the ball of Bumrah’s first ball of the day. However, it was a tough chance and Pant hurt his finger tips in the process.

But it did not take long as Bumrah came back in his seventh over and got Lawrence immediately. In fact, he holds the record for most wickets before taking the first wicket on home soil.

Considering England’s poor form against left arm spin, the team management gave a chance to Shahbaz Nadeem ahead of Kuldeep Yadav. On the other hand, veteran pacer Ishant Sharma is also back into the side after missing out Australia series due to injury.

England’s top order are trying to adapt to the conditions and it is going to be tough for India to bat last on Chennai pitch. Traditionally, Chennai offers loads of assistance to spinners and it will tricky for Indian batsmen if they are forced to chase down a decent total on the final day of the test match.