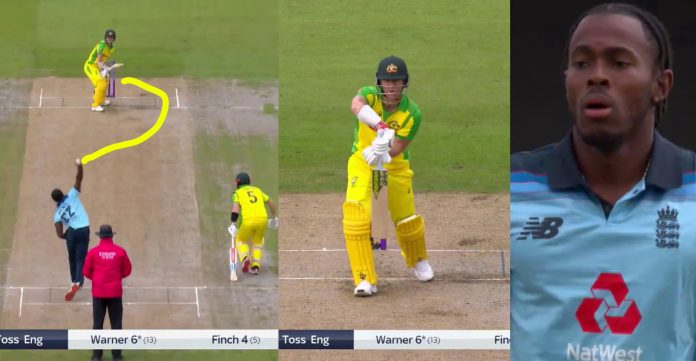 England fast bowler Jofra Archer once again got the better of David Warner. The young pacer has already dismissed David Warner in the T20I series in an emphatic fashion.

He once again manage to dismiss David Warner cheaply in the ongoing first ODI. After winning the toss, Eoin Morgan decided to bowl first. And Jofra Archer responded in style by dismissing David Warner again in this tour.

The delivery swung so perfectly that David Warner’s defense could not help him sustain. Pitching on middle, the ball went onto hit the off stump, thanks to some late movement off the pitch.

David Warner did not have a great time facing Archer in the ongoing tour. He was similarly dismissed in the first T20I after scoring a half century. But his wicket in crucial time helped England clinch a narrow victory.

This time though, Warner was rattled after scoring just 6. The southpaw could not help his team steer through the tough conditions in Manchester on Friday.

Here is the video of David Warner’s wicket

The Australian team has managed to overcome initial pressure from England bowlers. Despite losing three quick wickets, Marcus Stoinis, Glenn Maxwell and Mitchell Marsh have all played great cameos. This has propelled Australia to an score close to 300. This target will be challenging to English batters in the second innings.

Meanwhile, the rivalry between Jofra Archer and David Warner will not just end. The duo will face off against each other in the remaining two ODIs. However, they are most likely to again meet in IPL 2020.

David Warner is back as Sunrisers Hyderabad skipper after being banned from IPL 2019. On the other hand, Jofra Archer who was initially ruled out of IPL back in March has now gained full fitness.

He will be an important player for Rajasthan Royals. It will be interesting to see if Archer can have a similar impact against Warner on slow UAE pitches. Meanwhile, all England and Australian cricketers can join their IPL teams upon reaching Dubai.

The ongoing series will conclude on September 16. All the IPL players will arrive in Dubai on September 17. However, they might not need to undergo mandatory six day quarantine. They are traveling from one bio bubble to another. So there is a high chance for these players to feature in the tournament from match 1.