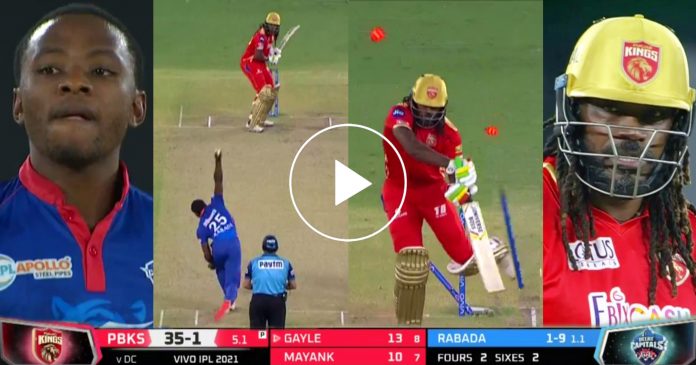 Punjab Kings batsman Chris Gayle was beaten for pace while facing Kagiso Rabada. The southpaw was just beginning to break the shackles on the evening. At the start of sixth over, Gayle pulled Rabada to a six.

But Rabada did not budge as he came back strongly. The next delivery he bowled a pacey full toss onto the stumps and Gayle was caught in surprise. The 41-year old had no answers as he played all around it.

The ball went onto crash the stumps as they went for a walk. Rabada did not celebrate much and Gayle was disappointed with his shot selection while walking back. It was a tough ball to face as the batsman did not have enough reaction time. Unfortunately, Chris Gayle was the victim on the day.

Punjab Kings are looking to build on their win against Royal Challengers Bangalore. However, they faced a major blow with the absence of KL Rahul. The talented Indian cricketer had suffered a acute appendicitis and was forced to be rested.

In the absence of KL Rahul, the onus was on Mayank Agarwal and Chris Gayle to oversee the batting. They are the two most experienced batters in that lineup. However, Gayle was dismissed to a brilliant ball from young Rabada.

The veteran has had a mixed IPL season so far. He played brilliantly in few games and largely anonymous in few others. However, Mayank Agarwal took the responsibility and made a brilliant half century at the time of writing.

Punjab Kings are currently languishing in the bottom half of the table. A win against Delhi Capitals will see them reach the top half. However, it will be a tough test as Delhi are one of the best sides in the ongoing IPL.

Kagiso Rabada is also looking to get back into good form. He also had a mixed season so far. After joining the team late, Rabada looks to finally get him rhythm back. He was their main bowler last season.

Delhi fans will be hoping to see more of the same from the South African. He took 3 wickets and looked brilliant against Punjab Kings.