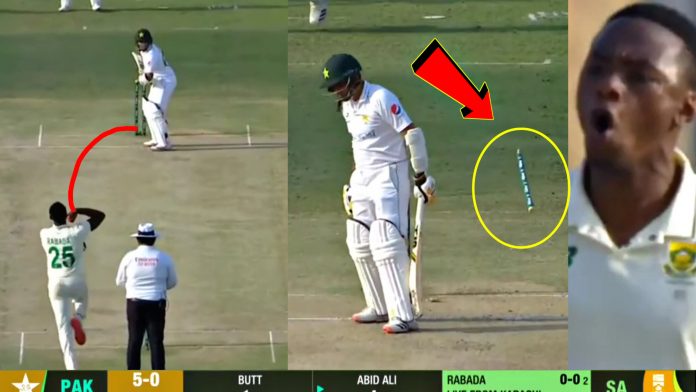 South African bowler Kagiso Rabada was in full flow in the ongoing Karachi test against Pakistan. The 25-year old bowled in rhythm towards the end of first day as he took two wickets by stumps.

In the sixth over, Rabada bowled a peach of a delivery to Pakistan batsman Abid Ali. Ali had no answers whatsoever as the ball evaded and took off stump for a walk. It is a classic wicket and a dream for any fast bowler to start their bowling in such fashion.

The ball pitch in line and hit the top of off stump. Rabada had a brilliant day with the ball and reached 199 wickets in test cricket with his two dismissals on the day. It will exciting to see if he can reach 200 milestone on Tuesday.

The hosts Pakistan were brilliant with the ball earlier on the day. After winning the toss, South Africa decided to bat first but none of the Proteas batsmen really kicked off in their innings.

Everyone got starts but could not convert them into fifties barring Dean Elgar. The Proteas opener have shown grit by playing his knock even while losing wickets at the other end. He scored yet another fifty but Pakistan bowlers were on mark from the off set.

Yashir Shah was the pick of the bowlers with three wickets. Meanwhile, Shaheen Afridi and Nauman Ali chipped in with two wickets each. South Africa could only muster 220 runs before they were bowled out inside 70 overs.

The visitors have not played in Pakistan since 2007. It was a long time since a major cricketing nation toured Pakistan and this is a major milestone for the board. CSA sent a delegation to verify the security in Pakistan before giving a nod to this tour.

The PCB have been making constant progress by ensuring proper security protocols in place. After the attack on Sri Lankan players in 2009, almost all cricketing nations barred Pakistan tour. So PCB were forced to shift their home base to UAE.

South Africa is just the beginning of the high profile teams that will play in Pakistan this year. New Zealand are scheduled to tour Pakistan later this year and England will follow suit. These are exciting times for cricket fans in Pakistan after their long wait.