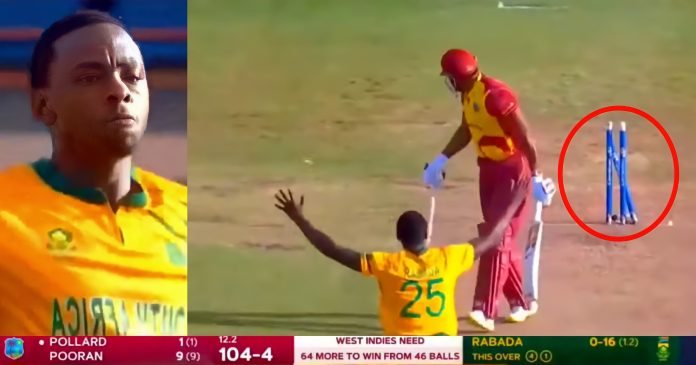 Kagiso Rabada is one of the best fast bowlers going around in international cricket. The right arm cricketer from South Africa is a fiery pacer who can knock the wind out of any batting team on his day. In just 47 tests, he has taken 213 wickets at an outstanding average of 22.75. Furthermore his strike rate of 41 is a testimony to the fact that he is a genuine match winner.

One of the most peculiar things about Rabada is his competitive nature. The more intense a contest gets, the more hot headed he becomes. Consequently, Rabada loses his cool during tense situations or after getting important wicket. This is evident in the case that he has been reprimanded for his behavior many a times by ICC for his run ins with the opposition batsmen.

The first time it happened was during Australia tour of South Africa in 2018. Kagiso Rabada got Steve Smith dismissed and then rubbed his shoulders with him purposefully during the wicket taking celebration. After repeating it again in the following test, Rabada was banned by ICC. However, the ban was over turned later after an appeal by South Africa cricket board.

Rababa stops himself from angry antics after taking wicket!

In early 2020, Rabada was again caught in troubled waters. This time his target was English captain Joe Root. England were touring South Africa for a 4 test series. In the third test, Rabada dismissed Root and then shouted and screamed angrily near him in an aggressive manner. Consequently, he was fined demerit points by the ICC which led him to getting banned for a test.

Fortunately for him, Rabada behaves in a lot more calm way on the cricket field now a days. A similar case of it happened yesterday in the match between West Indies and South Africa. The right arm pacer clean bowled opposition captain Kieron Pollard as the match was turning interesting and close.

As soon as the stumps were uprooted, Rabada came near the departing batsman and was about to raise his hands up and scream aggressively. It was very similar to Joe Root’s wicket reaction which had him banned. However, Rabada in a wise move pulled out of the celebration at the last moment. Consequently, he just gave a high five to his team mates and settled his excitement. It was quite an awkward moment for the pacer.

Watch the video of the wicket here :