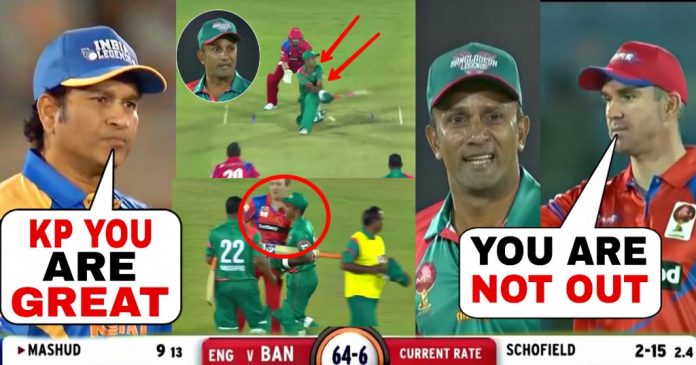 The road safety league is going on in India. Six teams from six different countries are participating in it. The tournament which started from march 5 will finish on March 21.

India had beaten Bangladesh in their first game of the season in a thumping way by 10 wickets.

After losing the first game, Bangladesh played their second game against England legends. The latter are being led by the former English great Kevin Pietersen while Bangladesh is playing under Mohammad Rafique.

Winning the toss, England legends decided to field first. Batting first, the Bangladesh legends team could not do much and only ended up making 113-5.

Khaled Mashud, the former keeper batsman of Bangladesh was the top scorer for his team with 31 off 39. For England legends, Chris Tremlett was the pick of the bowlers. He took 2 wickets for 10 runs.

In reply, England legends easily overhauled the target of 114. It took them just 14 overs and the loss of 3 wickets. The skipper Kevin Pietersen played a quick cameo of 42 from a mere 17 balls and was the highest scorer for his team.

Mohammad Rafique took 2 wickets for 31 runs in his four overs and was the most successful bowler for his team.

For his cameo and captain’s innings, Kevin Pietersen was adjudged the man of the match.

However, his innings wasn’t the only thing which won the hearts of cricket fans. It was also his lovely gesture of sportsman spirit that made him truly stand apart on the night.

The moment happened during the 4th delivery of 12th over. The English leg spinner Chris Schofield was bowling to the Khaled Mashud. The batsman played all around the delivery as the ball hit his pads and immediately the umpire adjudged him LBW.

Khaled Mashud immediately gestured that it was an inside edge onto his pads and he should not have been given out. However he began walking to the pavilion.

Then, Kevin Pietersen came to the forefront. He immediately talked about the same with his team mates and decided to call the batsman. The batsman who had gone halfway to the pavilion, had to come back and bat again!

It was a classic case of Sportsmanship and generous gesture which won Pietersen respect from every one present in the ground.