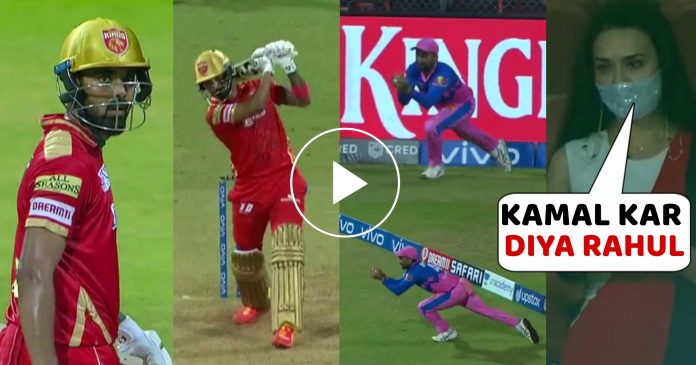 KL Rahul played a captain’s knock in his side’s first match of the season. Playing against Rajasthan Royals, he produced a scintillating innings of 91 runs in 50 balls. Moreover, his innings included 7 fours and 5 huge sixes. He continued his terrific form from last year when he had won the orange cap.

Rahul started his innings a bit slowly. However, after he got hold of the pitch, shots started to come out of his blade. His first six came when in the eleventh over against Rahul Tewathia. The leggie bowled a flighted delivery to Rahul. To that, he came down the track and launched him over his head.

His second six came off Shivam Dubey’s over whom he thumped back over the sight screen for a maximum. That six brought KL Rahul’s fifty in just 30 balls. Mustafizur Rehman too met the same treatment in the next over when he pulled a low speed short delivery over fine leg for a six.

His best shot of the night was still to come. It came in the 18th over of the innings. Morris bowled a pacy full length delivery. KL Rahul got down on his knees and swiped it off his pads for a scoop shot in the leg side for a beautiful six. That shot resembled the best of KL Rahul who is classy, elegant yet merciless.

He was not done in this over yet. On the fourth ball of the over, Morris bowled a short ball into ribs of the batsman. Perhaps, he was warry of the fact that a fuller length delivery would again be scooped for a six like 2 deliveries earlier. However, that made no difference to the outcome of the ball.

Rahul quickly got into the position and pulled him over mid wicket for another six. The batsman entered in the last over with 13 runs to get for his century. After hitting the first ball for a four. Rahul again hit a shot that was going for a six. But Rahul Tewathia took a brilliant catch at the boundary to dismiss him.

It devoid him of his century. After he got out, the camera panned towards the batsman. He could be seen a bit emotional with his eyes a bit moist.

Watch the video of the it here: