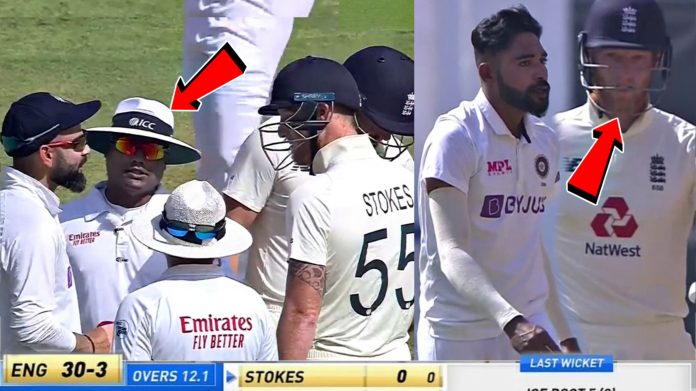 Virat Kohli and Ben Stokes were engaged in a massive war of words as tensions got flared up in the final test. Things got tensed up between the two hot headed players in the first session itself.

Both, Kohli and Stokes have a bit of history between them since many years now. It was only natural that the first bit of altercation between the two teams came out from these two players.

After Siraj had dismissed Root, Stokes came to the crease. Since the batsman is short on confidence as he has not yet score substantial runs in the series, the Indian team tried to put pressure on him.

The first ball Siraj bowled, Stokes was beaten. On the second ball of the over, Stokes edged one to slips where it beat the fielder and ran away for four. It was at this moment when Stokes said something to Siraj. The bowler, however shot back with his words!

The batsman and the bowler then kept on saying something to each other, till the end of over. Then, it was Kohli who decided to take the matter into his own hands.

After Siraj left, Kohli took over from him. The two then got face to face and had the choicest of words to say to each other. the umpire had to intervene between them to stop things from getting more serious.

With both teams looking for victory, tempers might flare up again in the heat of the moment! Watch out, Players!

Have a look at the video between the two, here-:

Kohli and Stokes engage in a war of words. Is vintage Kohli back? 🔥 #INDvENG pic.twitter.com/CHemFrKnC4