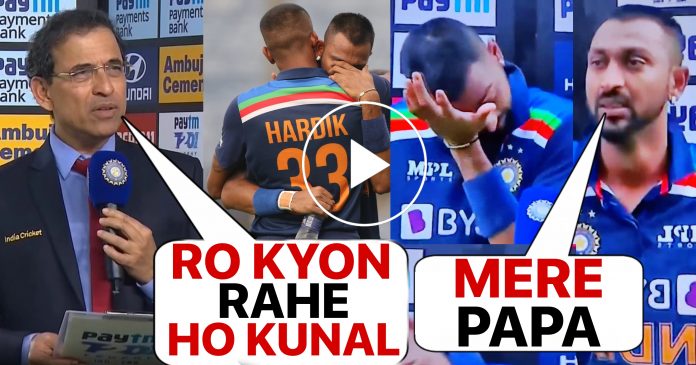 Krunal Pandya played a sparkling innings in his first match for India. The southpaw hit an unbeaten 58 in 31 deliveries. This innings from Pandya not only resuscitated the Indian innings but also left them with a great score of 317. At one stage, it appeared India would just fold for 270. But then, Pandya and Rahul added 112 in 9.3 overs to push the total towards than 300.

The elder of the Pandya brothers, Krunal is a regular player for India in T20’s. However, its the ODI’s in which he made his first appearance today. Moreover, he did not disappoint. Pandya played some eye catching strokes in his innings as he turbo charged the Indian innings.

It was an emotional match for Pandya. He lost his father a couple of months earlier. Since then, it was his first international match. As soon as he completed his fifty, he gave blows to his own helmet. Also, he raised his bat towards the sky while remembering his late father.

During the mid innings chat, Krunal Pandya was asked about his innings and how he felt about it. Krunal could only reply that this innings is dedicated to his late dad. Saying this, he started crying profusely in front of the camera and apologized for that. However, he could not recover from that and gestured to the camera that he is speechless and would like to talk later.

The presenter then politely asked him, to leave so that he can take his time, and then join at appropriate time. While going from there, Krunal Pandya was hugged by his younger brother Hardik Pandya. Yet again, Krunal broke down seeing his younger brother. He hugged him, kept his head on Hardik’s shoulders and kept crying.

Meanwhile, Hardik caressed his crying brother all this time. It was actually an emotional moment for both the Pandya brothers as well as for everyone present in the stadium. Later on it was revealed that father of Pandya brothers wanted to see them playing for India together in ODI. Since, it was not possible for him to see this happening, Krunal became emotional and cried.

#KrunalPandya #BCCI #IndvsEng Very emotional interview from Krunal post his fastest fifty on his debut !!! Literally didn't spk any, apart from uncontrolled emotions… Dedicating for his dad !!! What a batting with Rahul & at a time when Ind needed a big partnership. pic.twitter.com/vuY6OGXZWk