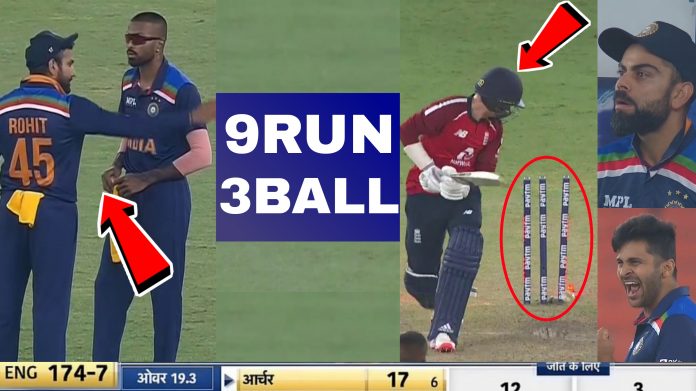 The fourth game between India and England has resulted in an Indian victory. India won the match by 9 runs. With this win, the series is now level at 2-2 . With the last game all set to be played as a “winner takes all”, it should be a cracker of a game.

Earlier in the match, India had set a target of 186 runs to England. The English team started off in a solid way and looked that they would win the game. At one stage, they required just 54 to win in final five overs with six wickets in hand. However, due to help from some sensational death overs bowling and ordinary batting by the batsmen, the equation came down to 23 runs required in last over with 3 wickets in hand.

Jofra Archer had just hit a boundary of final delivery of 19th over and was timing it well. So, Rohit Sharma went up to Shardul Thakur who had bowled just about OK in the match.

With 23 runs to defend, Thakur started the over with Jofra Archer and Chris Jordan on the pitch.

First ball of the over was an under edged shot which went for a single. 22 off 5 required.

The single brought Archer on strike. Thakur delivered one in his arc as Archer smashed it through long on for a much needed boundary.

Third ball of the over was a short one. But at Thakur’s pace, it sat up for Archer who pumped it over mid wicket for a huge six! That six brought immense pressure on the Indians.

With 12 required in 3 balls, Thakur delivered two consecutive wides. This brought down the equation further. Now only 10 were required in last three balls and suddenly England were buzzing and Indian team looked worried.

Rohit, Bhuvaneshwar and Pandya along with Thakur then formed a mini confrence as how to stop Archer from hitting it.

On the fourth ball of the over, Archer swung so hard that his bat got broken as he only got a single. Now 9 were required in 2 balls.

Only a single or dot would have done it.

Thakur ran in again to bowl the fifth ball of the over as Jordan batted. It was a back of length delivery as Jordan hit it through the line but without the elevation.

It went straight up in the air only towards long off where the fielder took the catch. The match was sealed as India had closed the match.

The last ball was a dot and India won the game by 9 runs.