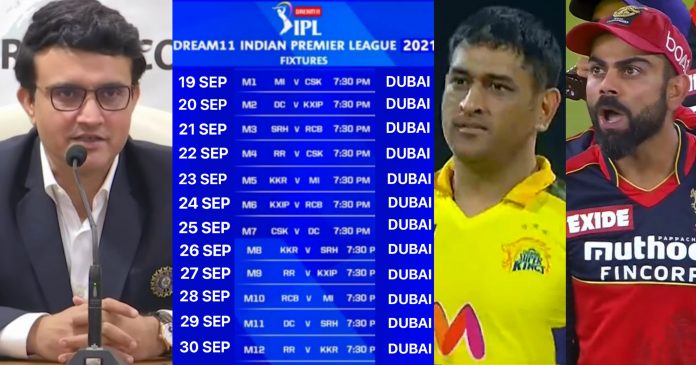 The Indian Premier League is all set to begin from 19th September 2021 in UAE. Earlier the fourteenth edition of the lucrative league was postponed in first week of May after 29 matches were successfully played. The reason for the postponement was the breach of bio bubble of teams by COVID.

Now the BCCI and IPL management committee has decided to re start the IPL away from India. Since there is impending danger of COVID still in India, the BCCI had no option but to shift the tournament to UAE.

The first match of IPL 2021 happened between Mumbai Indians and Royal Challengers Bangalore. It was Royal Challengers Bangalore led by Virat Kohli who won the match by 2 wickets. The last match to be held in the IPL before it was postponed was between Delhi Capitals and Punjab Kings. Delhi Capitals won the match by 7 wickets and 15 balls to spare in a thumping victory.

It was the 29th match of the season. Now in UAE, a total of 31 more matches will be played. The old schedule of the IPL was as follows :

In all likelihood, the matches will be rescheduled as per original date sheet from September 19 in UAE. Last season of IPL was held entirely in the 3 cities of Dubai, Sharjah and Abu Dhabi. This time around, it remains to be seen if all three cities will again host the remaining matches or it will happen in just a single city.

Delhi Capitals were the leaders of the points table when the IPL was called off. Behind them were Chennai Super Kings. The points table looked as follows :