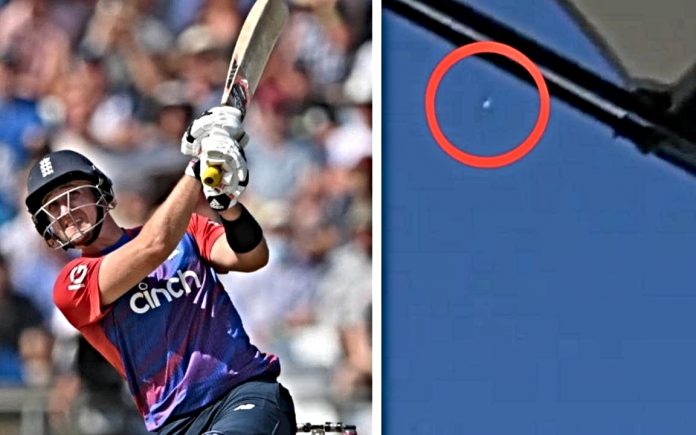 The England batsman Liam Livingstone has come like a breath of fresh air in English cricket in limited overs format. In the first T20 vs Pakistan, he smashed England’s fastest 100 in just 43 balls. The right hander batsman kept hitting sixes at will as he tormented the tourists bowling attack. Again in the second T20, Livingstone showed that his innings in the first game was no flash in the pan.

He played a brilliant cameo of 38 runs in 23 balls that included 2 fours and 3 sixes. Coming into bat at number 5, Livingstone hit the ground running when he thumped Haris Rauf over long on for a huge six. However that was just a trailer to what was coming. The 13th over saw another 6 by the right hander when Imad Wasim did the mistake of giving the ball a bit of air.

As a result, Livingstone crashed it over long off for another massive six. Still, the biggest of the lot was yet to come. The moment arrived in 16th over and the hapless bowler was Haris Rauf. On the very first ball of the over, the medium pacer bowled a gentle length ball. What followed was a rare sight that left many in the stands in awe.

Livingstone absolutely pumped the ball straight over the bowler’s head. Consequently the ball went up and up till it travelled outside the ground. Such gigantic was the shot that it appeared as it would even bypass the stratosphere. The more the ball went the distance, the more the commentators and fans were in disbelief.

One of the commentators mentioned that he did not see such a colossal hit ever in his life. Another said that the ball must have gone into the neighboring Rugby ground. Furthermore the fans were also thrilled on what they saw.

The poor bowler Haris Rauf had no option other than to shrug it off as an aberration and quietly went back to his mark.

Talking about the match, England beat Pakistan by 45 runs to level the 3 match series. Batting first the hosts made 200 runs in 19.5 overs. Jos Buttler was the highest scorer for his team as he made 59 runs in 39 balls. In reply Pakistan could only manage 155-9 in 20 overs. They had a decent start with the bat when the openers added 50 runs for the first wicket.

However post that the tourists lost their way and could only score 155 in 20 overs. The 3 match series is now level at 1-1 with the deciding game of the series to be played on Tuesday.

Watch the video of the six here :

Biggest six ever?! 😱 @LeedsRhinos, can we have our ball back? 😉

Watch Five most expensive captains in IPL and their shocking salary.