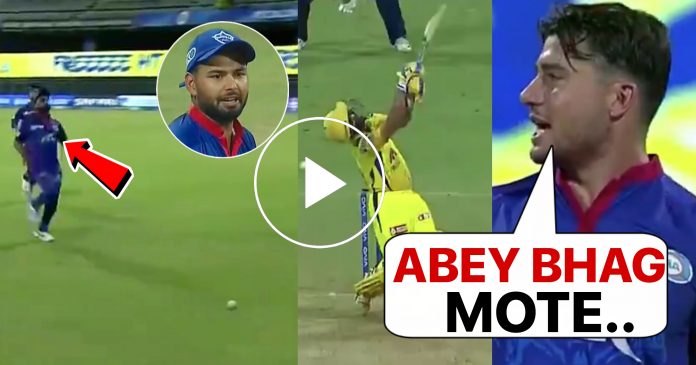 Marcus Stoinis, the Australian all rounder, was caught in a bit of controversy over a moment in the first match, of Delhi Capitals. The bulky athlete, was caught abusing veteran Amit Mishra for showing, a lack luster fielding effort at third man. Stoinis, is generally considered to be one amongst, the coolest and calmest player from Australia. Seeing his outburst, a lot of fans were shocked.

The incident happened during the 13th over, of the Chennai innings. Stoinis had, just bowled a no ball and it was, a free hit delivery the next ball. While Chennai, were looking to accelerate the innings, Delhi was looking to minimise the damage. In that time, Stoinis bowled a no ball which, frustrated him to the core.

On the next ball which was, also a free hit one, Stoinis bowled a short one, into the ribs of the batsman Ambati Rayudu. He tried to pull, but missed the pace of the ball as it, hit him into his ribs and bounced, before Pant and fell just in front of him. He too, dived but the ball beat him and started running away, through the third man area.

Amit Mishra was stationed, at short third man. He started giving the ball a chase. Not that the ball, was travelling too quick as it had, bounced twice before going along the carpet. Still, Mishra struggled to match, the pace of the ball as it kept, running away. Moreover, it was clear that Mishra is running very slowly, and casually towards the ball. It was almost, as he was jogging in a park and not running.

Naturally, the ball went away, to the fence and after watching this, Stoinis lost his cool and became really angry, at the casual approach of his team mate, Amit Mishra. He gave, a bit of *choice words* to Mishra as his anger was for, everyone to see. Rishabh Pant, the skipper was also unhappy at the effort of Amit Mishra.

For Mishra, the one thing that could be said in his defense, that he is close to 40 years old and sprinting at, that age on a cricket field is, rather difficult thing to do.

Watch Padikkal becomes emotional while talking about COVID and its effects