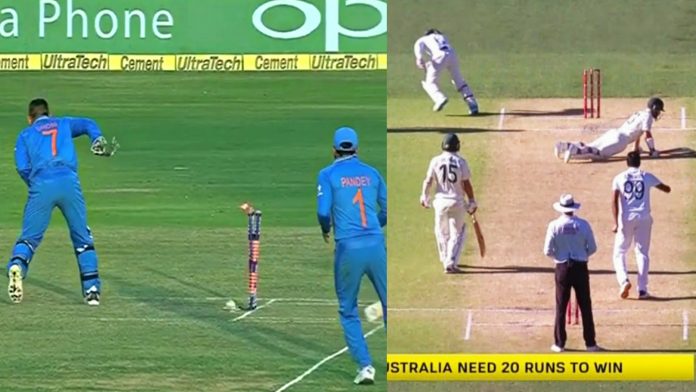 Australian opener Matthew Wade was dismissed via a bizarre runout while chasing 93 in the 4th innings. He along with Joe Burns have forged a 70 run partnership to ensure that there are no hiccups in the chase.

Matthew Wade once again shined with the bat and made 33 before getting dismissed in an unlucky manner.  Wade ran down the pitch to counter Ravichandran Ashwin. He tried to flick the ball towards deep square leg. But the ball hit the shin pad of Prithvi Shaw who was fielding at short leg.

The ball clonks Shaw’s right boot and went into the path of Saha. He was vigilant enough to take the ball and lob it into stumps. Wade was already half way through the pitch and can only stare at his funny dismissal.

Here is the incident

Australia earned a massive win in Adelaide after failing to dominate in the first 2 days. The hosts came roaring back into the match courtesy of their pace bowlers. Both Hazelwood and Cummins created all sorts of problems for Indian batsmen in the first session of Day 3.

Virat Kohli and other batters had no clue as they lost their way completely in the opening 30 min. At one stage, India were looking to cross the lowest test innings score ever. However, they somehow manage to cross the mark and post 36/9 before Shami was retired hurt.

Australian batsmen came out and had an easy chase to go 1-0 up in the series. Joe Burns managed to impress by scoring an unbeaten fifty. However, this defeat will have huge psychological effect on Indian contingent as they lost this match in just few minutes.

Add to the fact that Virat Kohli will not be available for the next match, India are going to face a much sterner test in Melbourne on Boxing Day. India will take on Australia in the second test at MCG from December 26. India will be boosted by the return of Rohit Sharma while Australia are expecting to see David Warner fully fit for the next match.