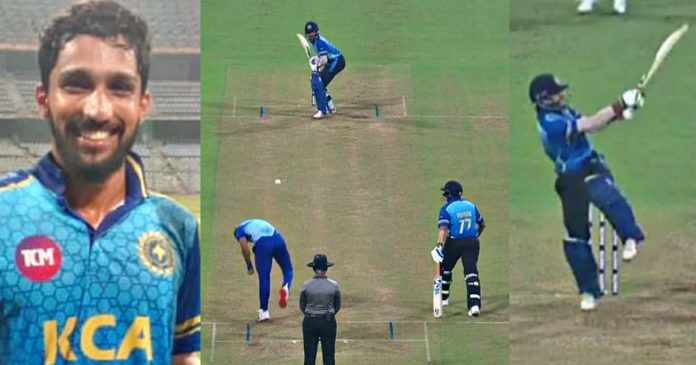 Kerala batsman Mohammad Azharuddeen has produced one of the finest knocks in Syed Musthaq Ali Trophy. The 26-year old has made a name for himself with this knock as Kerala chased a mammoth score set by Mumbai.

On the other hand, his incredible century will help his fetch a franchise soon in IPL auction. Azharuddeen has scored an impressive century in just 37 balls. The Kerala opener was able to produce a great knock as they chased down 197.

Azharudden scored an unbeaten 137* from just 54 balls as Kerala sailed over in under 16 overs. He smashed 11 sixes in his innings and registered the joint third-fastest century in T20 cricket by an Indian batsman. He is also playing a consistent role in Kerala team since making his first team debut in 2015.

Azharuddeen’s brother was a huge fan of former Indian skipper Mohammad Azharuddin. So he convinced his parents to name the cricketer after the star cricketer in 1994. The cricketer have had some hiccups over the course of his career.

But his moment to shine came against Mumbai. Now, he is well known amongst cricket fans and will be interesting who will go after him in IPL auction 2021.

Sensational stuff this is from Mohammed Azharuddeen. 👍👍

What a knock this has been from the Kerala opener! 👏👏 #KERvMUM #SyedMushtaqAliT20

Batting first, Mumbai managed to post an good score of 196/7. Openers Yashasvi Jaiswal and Aditya Tare have provided Mumbai the perfect start with an 88 run partnership. However, none of the Mumbai batters were able to make a big score.

This is where Azharuddeen made the real difference. He got a quick start and went on a relentless attack against Mumbai. The Mumbai bowlers had no clue how to bring curtains to Azharuddeen’s innings. He eventually made a mockery of their bowling and chased the score with utmost ease.

After the successful completion of IPL 2020, BCCI are gearing to set up auction during next month. Currently, the board has allowed the transfer window where franchises can trade their players to other teams.

The window is open till February 4, 2021. It is widely reported that the auction will be held in February. This will be the last mini auction as IPL 2022 will be expanded with 10 teams.

Watch Rohit Sharma gets hit in a painful blow to elbow. Replies the bowler...