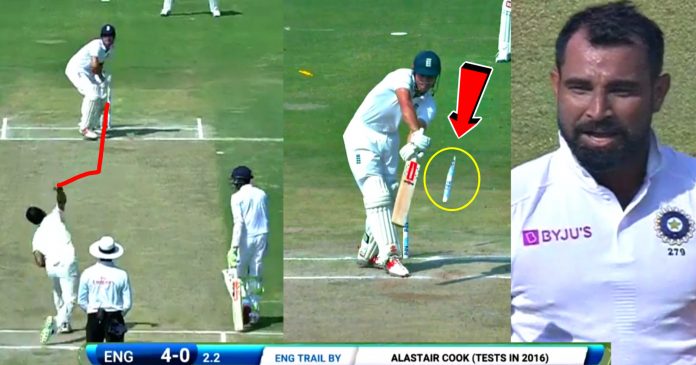 Indian pace bowler Mohammad Shami is one of the vital cogs in test cricket for India over the past few years. He has been the backbone of pace bowling attack and was part of India’s fast bowling resurgence.

The incident happened during the second test in previous test match series against England. On a humid day at Vizag, Shami was able to clean bowled Cook which is still a fond memory for many Indian fans.

India posted a massive 455 runs in their first innings and Alastair Cook had no answers when he came onto bat. Mohammad Shami has planned to get Cook’s wicket brilliantly. He setup the experienced campaigner with deliveries outside off stump.

The first two balls were pitched outside off stump and were out-swingers. But the third ball came in sharply as Cook’s feet did not move. He was caught in two minds and the inswinger got the better off the veteran cricketer.

Shami’s ball went onto break the off stump which would be a dream wicket for any pace bowler. India were able to win the test match easily at Vizag but this wicket is surely one of the best in test cricket in the last decade.

Meanwhile, Mohammad Shami has not been included in the first two tests against England. The pace bowler fractured his arm after getting hit on the arm by a short ball from Pat Cummins in the first test at Adelaide.

The Indian pacers rose up to the occasion and went onto play a massive role in helping India clinch Border Gavaskar Trophy. On the other hand, Shami is continuing his recovery from his fracture.

India are set to face England in a four match test series starting February 5th. The first two test matches are scheduled to be played in Chennai while the latter two will be played in Ahmedabad.

It is India’s first home series since the COVID outbreak but the euphoria around the test series has been good. India are going into the series as firm favorites as they have lost only one test match at home in the past eight years.