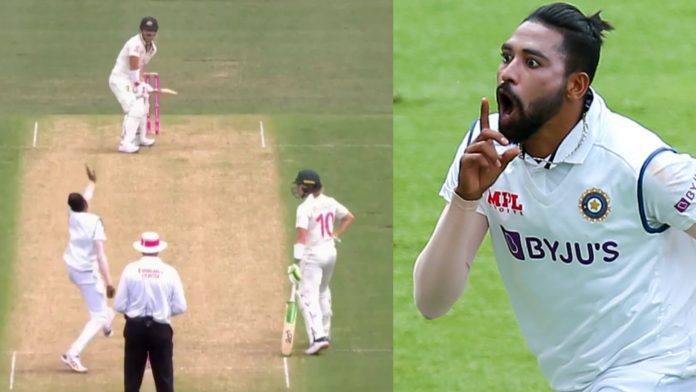 India got off to a great start in Sydney test. After winning the toss, Australia have decided to bat first. The return of David Warner has boosted their batting lineup.

However, young Indian pacer Mohammad Siraj ensured that his stay at the crease was short. Warner looked rusty in his short stay probably due to coming back from injury. He was lazy and threw his hands at a wide ball.

Warner simply saw the width and went for the drive. But the ball took the outside edge and flew to Pujara at first slip. The experienced Pujara made no mistake and India got the most important early wicket on day 1.

Warner will be very unhappy with the way he was dismissed. He was Australia’s key player at the top of the order going into this test match. On the other hand, debutant Will Pucovski looked good so far in the innings.

Mohammad Siraj once again impressed with the new ball but it is still early days in the test match. Shortly, after Warner was dismissed rain played spoilsport and the game is yet to resume at the time of writing.

He chases one from Mohammed Siraj and goes early doors.

He even got a bit of a send-off 👀#AUSvIND pic.twitter.com/ijfWBYLEWf

India brought in Rohit Sharma at the top of the order and gave debut to fast bowler Navdeep Saini. However, we are yet to witness Saini bowling in the game as the teams walked off the pitch after just 7.1 overs.

Australia will look to play positively after the restart. However, damp conditions could favor Indian seamers once the match resumes. But rain is predicted over the course of the test match.

So it is a likely option that rain could play a major factor and a draw is more predictable result if rain gods continue to show their presence in Sydney. Meanwhile, India and Ajinkya Rahane will hope to continue their rich vein of form.

The bowlers started off where they left in Melbourne. It will be tough time for Aussie batters for couple of hours before things could start to ease up. The rain is still pelting hard in Sydney and another inspection is scheduled at 2pm local time.