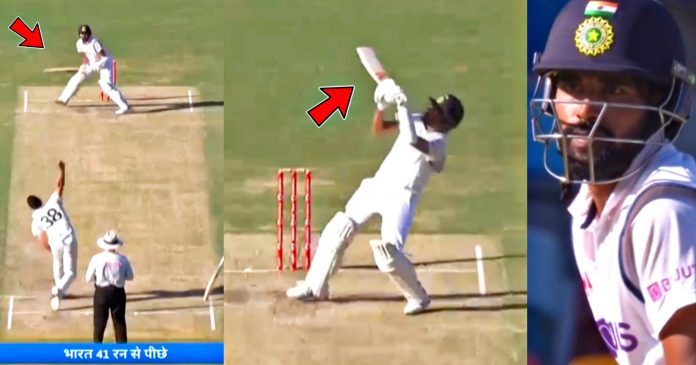 Indian cricketer Mohammed Siraj has provided some entertainment to the fans while batting today. The pace bowler had to come out to bat and ensured that he was scoring runs from the first ball.

The intent was clear from Siraj from the start as he scored a boundary against Hazlewood. He again connected the ball to score another two runs of the next delivery. With Washington Sundar at the other end, Siraj was happy to stay content.

Once Sundar was dismissed, Siraj tried to score runs from slogging the ball. He tried to play T20 shots trying to upset the rhythm of Australian bowlers. But his best shot came when Hazlewood bowled a bouncer to him.

Siraj just ducked and helped the ball on its way with a superb upper cut. The ball flew over slips cordon and just fell a metre short of boundary ropes. He almost hit a six against Australia’s best bowler of the day.

Siraj tried a couple more things but they did not come off. He was dismissed by Hazlewood in the same over as the Australian had the final laugh. However, Siraj will remember that brilliant shot for many years.

Meanwhile, India has managed to fight back thanks to some superb batting display from Washington Sundar and Shardul Thakur. The duo forged a 123 run partnership for the seventh wicket helping India reduce the deficit in first innings.

After the dismissal of Rishabh Pant, India was looking at conceding a lead of more than 100. However, the brilliant partnership by two batsmen who are playing their first test innings with the bat was remarkable.

They frustrated Australian bowlers and milked runs whenever possible. Both of them played some brilliant shots and gave nothing away. This incredible fightback has helped India cut Australia’s lead to just 33.

All Indian middle order batsmen got starts but none of them fifties which is a cause of concern. Australia ended the day on a strong note at 20/0 effectively 53/0. Indian bowlers need to bowl the hosts out before the lead crosses 250 if they want to have a chance to win this test series.