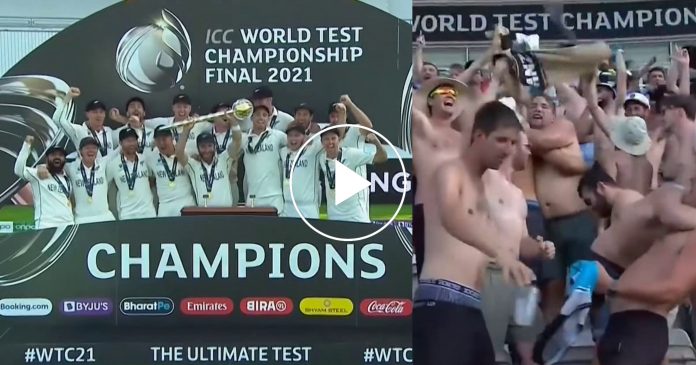 New Zealand have finally won an ICC tournament after a gap of 21 long years. The perennial under dogs of cricket have finally made their presence felt in international cricket by winning the inaugural ICC World Test Championship. After missing out in 2015 and 2019 World Cup of 50 overs where they lost after reaching in both finals, New Zealand managed to get past the finishing line. 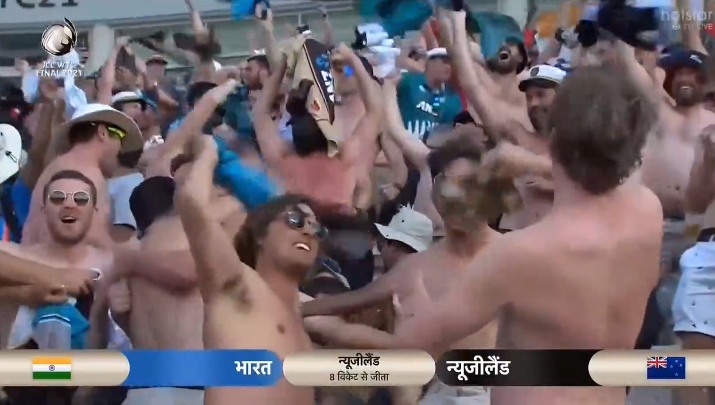 After this achievement, no wonder all the Kiwis were ecstatic. While the players jumped around in joy after winning the trophy, the supporters and fans of New Zealand team had a different style of celebration.

They all removed their shirts and started to wave it and then danced in unison beside jumping and hopping in a mode of jubilation. It was a rather unique as well as weird method of celebrating the victory of their team. This celebration soon became viral on social media and everyone loved it.

Earlier, Kyle Jamieson was awarded the man of the match for his sensational performance with the ball. He took 5 wickets in the first innings and two wickets in the second innings. Moreover, he dismissed the Indian captain Virat Kohli both times in the test match.

After the match, Jamieson said :

“We knew we had a big first hour, and just to see how things panned out. We were hopeful they might pan out our way if we put the ball in the right place, but we knew this is a quality Indian team as well. It was nice to get the ball first up and to play a part”.

His partner Tim Southee also had to say a few words. The senior pacer who became the first fast bowler from New Zealand to take 600 international wickets said :

“We started this journey two years ago. To be sitting here as champions is special. There’s a lot of hard work that has gone into it. Consistency comes to mind: consistency through performances, consistency in selection. We do a lot for each other. It’s satisfying to achieve what we have. The turnaround dates back to beyond the last couple of years”.

All the Kiwi players were very emotional after the victory. After all, it is the first time they have become champions of an ICC Tournament.