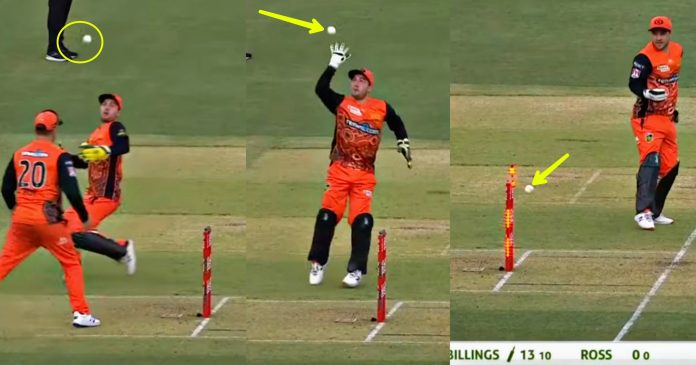 Cricket can produce some iconic moments when you least expect it. That is exactly what happened in the match between Perth Scorchers and Sydney Thunder.

A series of comical errors but somehow Alex Ross was the victim in a bizarre and shocking run out that we have witnessed in sometime. Big Bash League has been a source of entertainment for cricket fans around the world right now.

The quality of the league is very high and the standard of cricket played is mesmerizing. With players from around the world, the league is arguably the second best T20 league behind IPL.

However, things could go weird in BBL just like any game in cricket. Sydney Thunder batsman Alex Ross was out for a diamond duck. He did not even face a delivery but was subject to one of the most shocking run outs of all time.

Sam Billings hit the ball onto onside and started running. Alex Ross wanted a second but Billings was really not into it. So he sent Ross back but he was already long way down the wicket.

He couldn’t recover to get back in the crease. But the throw from fielder was not ideal but keeper somehow managed to hit the stumps. Initially he was thought to have messed it up, but he palmed it to the stumps in a bizarre fashion. The ball bounced and spun before dislodging the bails.

Jason Roy who was at the stumps had a laugh as they got their wicket. But things would have been lot different if they messed it up.

Here is the funny runout

You are KIDDING me!!! Jason Roy's reaction to this run out is golden! 😂😂@BKTtires | #BBL10 pic.twitter.com/JDhIJ8CjLW

Meanwhile, Sam Billings continued his impressive knock and scored 83 runs from 48 balls. He proved to be the difference maker on the day as Sydney Thunder won the match by a comfortable 17 runs.

The result meant Sydney Thunder remain at the top of BBL table. On the other hand, Perth Scorchers are fighting for a knockout place as they are languishing in fifth position in the table.

Perth Scorchers will play Hobart Hurricanes next at Perth on Tuesday. Meanwhile, Sydney Thunder gear up for Sydney derby against Sydney Sixers a day later.