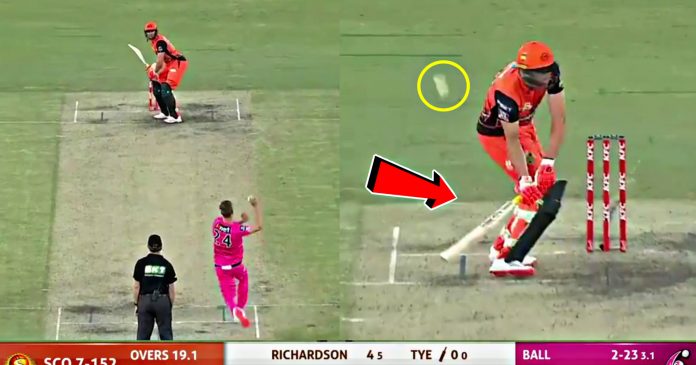 Batting first at Manuka Oval, Perth Scorchers got off to good start as Jason Roy and Liam Livingstone laid the perfect platform with a 76 run partnership for the opening wicket. Colin Munro also played key hand with Livingstone as the latter managed to score a half century.

But the Scorchers’ middle order failed in the match. The wickets kept tumbling like a pack of cards during the second half of the innings. Sydney Sixers bowled intelligently according to conditions and got crucial breakthroughs.

However, the moment of the match came when Andrew Tye came onto bat in the 18th over. He was ready to play a predetermined scoop over short leg. But Sixers’ bowler Jake Ball followed Tye and bowled the delivery wide from the off stump.

Tye managed to somehow find the balance and produced a bit of innovation with the bat. He did scoop it over short third man in a bizarre yet innovative way. Tye scored 8 runs from 4 balls as Scorchers managed a par score of 163 in their 20 overs.

During the chase, Sydney Sixers got off to good start as Josh Phillippe went all guns blazing. The talented wicket keeper batsman got ample support from James Vince at the other end.

Both of them attacked Perth Scorchers bowlers and forged a century partnership. Josh Phillippe was the star with the bat after scoring 84 runs from just 52 balls. On the other hand, James Vince also got his half century. This helped them chase the par score with ease as Sixers continue their dominance at the top of the table.

Sydney Sixers continue their dominance at the top of the table as they are way ahead of all other teams in BBL 2021. On the other hand, Perth Scorchers are currently third in the table and are in a four way battle with 21 points.

Perth Scorchers will next play Brisbane Heat on Tuesday at Perth while Sydney Sixers will rest for a few days. They will play against Sydney Thunder on Friday.

Watch Rishabh Pant run out due to Virat Kohli’s mistake.