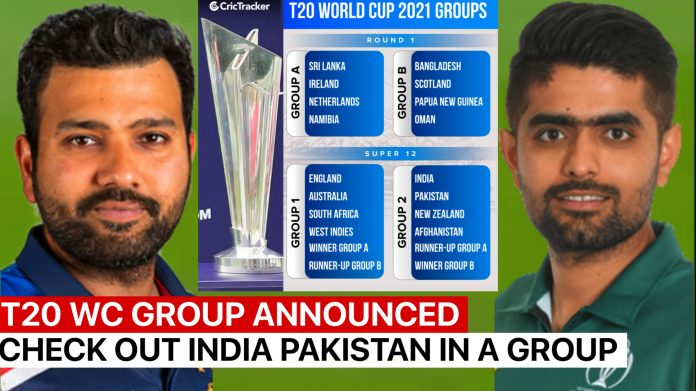 The groups for upcoming World T20 has been announced by the International Cricket Council. This tournament was originally scheduled to be happening in India in October. However COVID risk in India forced the BCCI to change their stance and shift the tournament from India. Now the T20 world cup will be hosted by UAE and Oman from 17 October to 14 November.

Incidentally India was the host of last T20 world cup held way back in 2016. Being the hosts they were favorites to win the ICC trophy. However West Indies beat India in the semi final and dumped them out of the tournament. The next World Cup was supposed to happen in Australia in 2020 and India 2021. But the COVID situation did not allow the tournament to take place in Australia last year and now India too won’t host the event.

“We are delighted to announce the groups for the ICC Men’s T20 World Cup 2021. There are some great match ups offered by the groups and it starts to bring the event to life for our fans as our first multi-team event since the onset of the global pandemic draws closer”.

“It is good to get Oman in the frame of world cricket with the hosting of the ICC Men’s T20 World Cup. It will help a lot of young players take an interest in the game. We know it will be a world class event in this part of the world”.

Dubai, Sharjah, Abu Dhabi and Muscat are the four cities where the marquee competition will be held.

The remaining schedule for the tournament is yet to be announced.