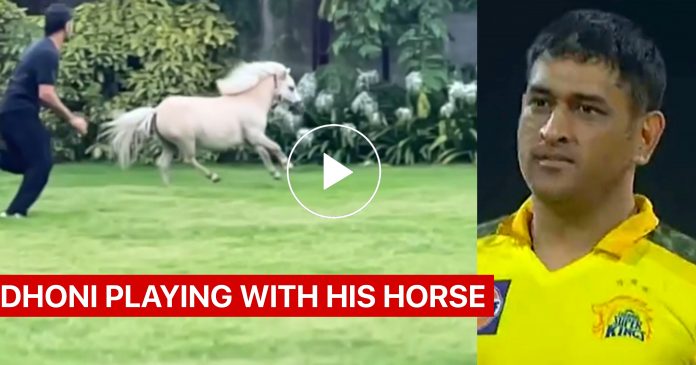 Mahendra Singh Dhoni has been off the field for more than a month now. The former Indian talismanic wicket keeper and skipper who is currently the captain of Chennai Super Kings last played for his franchise in the first week of May. Then, the bio bubble of teams was penetrated by COVID . Consequently, one after another, a lot of positive cases happened in the IPL amongst the players. Hence, the IPL was postponed immediately to stop any further damage. 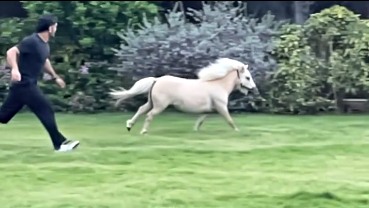 With the IPL scheduled to re start in September, there is still some time to go before fans can see Mahendra Singh Dhoni on cricket field. After his retirement from international cricket, its the IPL only where Dhoni’s presence can be seen.

With no cricket to come for the Ranchi lad in near future, it seems he is enjoying his days off from the field. Recently, his wife Sakshi Singh shared a video on her Instagram account which was related to Dhoni. In the video, the former India player can be seen racing and running with his pet pony in a playful way.

The video was shared by the caption –

Dogs and Horses at Residence of Dhoni

It is a known fact that Dhoni has a lot of pets at his own farmhouse which is situated in Ranchi. The Pony which is white in color is one of those pets. Also, Dhoni himself pays a lot of attention to his pets and becomes their caretaker whenever he gets the chance.

Along with the Pony, Dhoni has 4 dogs and a horse at his 3 storey farmhouse. The name of the dogs are also quite interesting. It reads : Sam (Belgian Malinois), Lilly (White Husky), Gabbar (White Husky) and Zoya (Dutch Shepherd). The name of his horse is Chetak. It was only last month that Sakshi Dhoni shared a video in which MS Dhoni was seen adoringly patting and rubbing the back of his horse.

Also, he can be seen playing with his dogs in older videos from his Ranchi’s farmhouse.