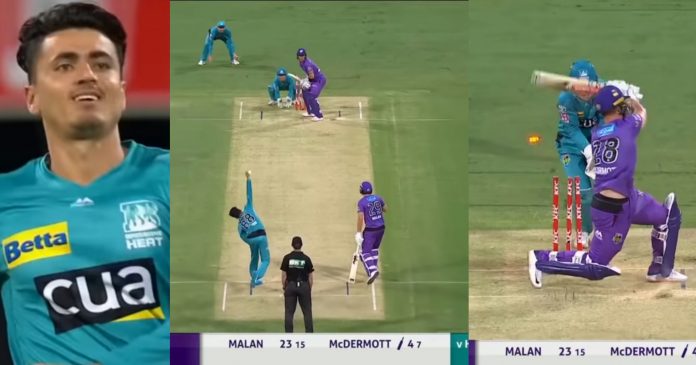 Afghanistan bowler Mujeeb Ur Rahman showed his magic in the game against Hobart Hurricanes in the ongoing BBL season. Mujeeb were the star for Brisbane Heat on the night at Gabba. However, his team lost the match by just 1 run in a heart breaking way.

The tricky off spinner managed to get the better off batsman every single time. He got 4 wickets bowled and one caught & bowled. His impressive bowling display helped Brisbane to restrict Hurricanes to just 149.

Mujeeb created instant impact by removing Hurricanes wicket-keeper batsman Ben McDermott with his first delivery. Jimmy Peirson used him again in 13th over to get a wicket and Mujeeb dismissed Dawid Malan, who was in fine form scoring 32.

Zadran bowled his last over in 19th and took three wickets with a wide sparing the hattrick. Keemo Paul became his third wicket. Will Parker (0) and Scott Boland (0)  soon followed as they failed to read his deliveries. This spell helped Brisbane to restrict Hobart to a below par total.

Incidentally, this is also his first ever five wicket haul in his T20 career so far. The talented youngster had faced issues during IPL earlier this year but came back strongly in Big Bash League. He played only two games in IPL this season and dropped later after proving ineffective

In the five games he played in BBL this season, he was very economical and picked up important wickets when needed. The return of form would do him good as a confident Mujeeb could run through any world class batting lineup on his day.

The win helped Hurricanes move to third in the league table. On the other hand, Brisbane Heat are languishing in sixth spot and it is looking increasingly tough for them to qualify for the knockouts this year. Heat needs to start winning now after accumulating just 6 points from their 5 games.

Brisbane Heat will next face table leaders Sydney Sixers on January 2. Meanwhile, Hurricanes face Melbourne Stars in Hobart on the same day. Mujeeb will need to continue his brilliant form if Heat are going to have a slim chance of progressing.