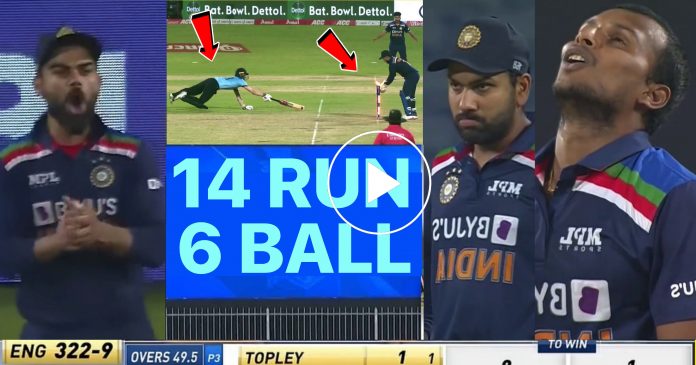 In one of the most astonishing and exciting matches of 2021, India beat England by 7 runs to win the series. It was a game of heart stopping moments that ebbed and flowed as both teams fought tooth and nail. They fought till the last of their resources and with every thing left in their tank.

In the end, India prevailed over the opposition by a mere margin of 7 runs. Chasing a target of 330 runs, England were left reeling and in a free fall at 200-7. At that stage, only India looked the likely winner.

However, in a scintillating turnaround and counter attack by the English tail enders, the match turned around on its head. The pair of Sam Curran and Adil Rashid added 57 runs for the eighth wicket before a freak catch by Kohli ended Rashid’s vigil.

Then came the partnership which left the fans of both the teams gasping for breath. Sam Curran and the number ten Mark Wood combined to drag England to the doorstep of both the match and series victory. The duo formed a partnership that put England above 300.

It was here that India started to panic. A lot of catches were dropped in the final overs as Indian fielders wilted under pressure. Through a combination of some luck and brilliant batting, the equation for the last over read 14 runs in 6 balls with 2 wickets to go.

England were 316-8 in 49 overs. Sam Curran the dangerman was on strike in the last over supported ably by Mark Wood. For India, Yorker and death overs specialist T Natarajan came to bowl.

In just two good shots, the match could have ended for Indian team. However, T Natarajan held his nerve. The last over of the match went like this:

Ball 1- A Yorker length delivery was drilled straight to long on where Pandya collected the ball and fired a throw to keepers end. The batsman Mark Wood wanted to bring Curran back on strike but was run out by Pant.

Second ball – A length ball was carved for a single by the last batter Reece Topley.

Third ball – Another one was drilled into the block hole as Curran once again failed to hit it over the fence and refused to take the single.

Now the equation read 12 off 3 to win for England and India needed a wicket.

Ball 4 – Just like the previous ball, again a Yorker was drilled to the fielder at long off. Now just 2 balls were remaining and 12 runs were still required.

Now both the balls had to be hit for sixes.

With the series on line in penultimate ball of the final over, Curran finally hit one over covers but could only manage a four. He needed a six but just four runs came as India’s victory was all but sealed.

The victory was confirmed on the final ball when another full length delivery was smashed but only to the fielder at long on. India had successfully defended a target of 330 runs.

Watch Video of Last OVER