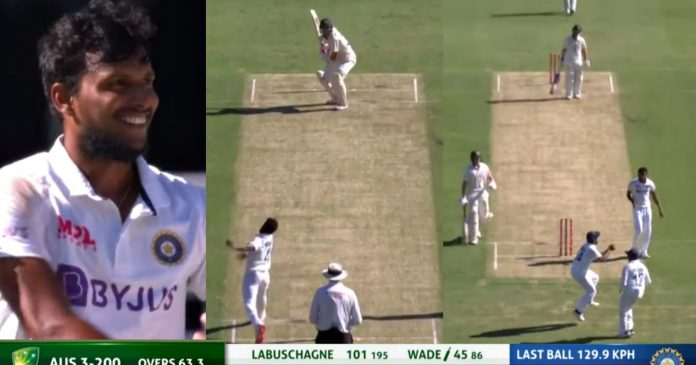 The fast bowler has managed to earn his first test cap for India in the final test against Australia. The loss of Jasprit Bumrah to an injury paved way as India went into the match with four pacers.

Natarajan bowled good lengths and tight lines for most part of the day. He produced key breakthroughs when Australia begin to pull through on the day. The 29-year old managed to pick the wicket of Matthew Wade to break a century stand with Marnus Labuschagne.

Once he took his maiden wicket, Natarajan came back to dismiss Labuschagne who was batting on 108. It was a memorable day for the cricketer as his hard work helped him reach the international test cricket.

Earlier in the day, Natarajan was handed the test cap by India’s bowling coach Bharat Arun. He became the 300th player to represent India in the longest format. The talented bowler also became the first Indian player to make debut for the team across all three formats on the same tour. He made the “perfect treble” which no one has achieved ever.

On the other hand, the team management were forced to make four changes to the team that played in Sydney. Spinner Ravichandran Ashwin and Hanuma Vihari also missed out due to injuries sustained.

The stuff dreams are made of. A perfect treble for @Natarajan_91 as he is presented with #TeamIndia's Test 🧢 No. 300. It can't get any better! Natu is now an all-format player. #AUSvIND pic.twitter.com/cLYVBMGfFM

The team are playing on their bare bones as they hardly have any players left to field outside the playing XI. It was a tough series for India but despite the struggles, the visitors showed character.

Natarajan impressed the fans with his bowling on the first day. However, Australia looks to be in the leading position. Both Cameron Green and Tim Paine has managed to see off the second new ball and once the ball becomes softer on day 2, the runs should flow.

Indian bowling unit has only 4 tests experience coming into this match. But they have a big task in their hands to control Australia from making a huge total tomorrow. Natarajan has more responsibility as he is looking in good form along with Mohammad Siraj.