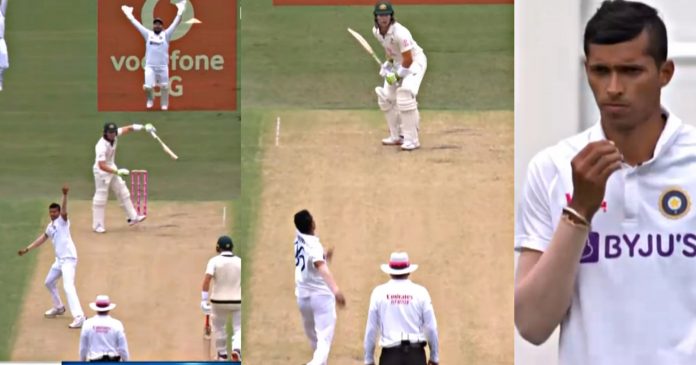 Captain Ajinkya Rahane did not bring him on until before the tea break. Saini bowled the last over of the second session.

Australia’s debutant Will Pucovski was looking dangerous alongside Marnus Labuschagne. However, Pucovski was given couple of lives while batting in his first test innings.

The talented young cricketer made the most out of his lives and rode on his luck. In the process he upped his scoring rate which helped Australia dominate Indian bowlers for the first time in the series.

Pucovski scored his maiden fifty and stitched a 100 run partnership with Labsuchagne. The pair were looking dangerous but Saini came to the rescue. He gave an important breakthrough to Ajinkya Rahane and India.

Coming to the dismissal, Pucovski has moved too far on the offside and was caught napping when Saini bowled an inswinger. Although, he was far off, Saini managed to stuck his pads and the ball went on to hit the stumps.

Pucovski immediately walked back without much protest and Saini got his first test wicket. Replays suggested that ball hit marginally inline but it was umpire’s call. So the decision would have stood even if Australia reviewed it.

Indian bowlers are working hard as the wicket is batsmen friendly so far. Although they managed to get a half chance once in a while, Aussie batsmen have looked in control for most of the innings.

For the first time in the series, Australia looked aggressive while batting. This put India on a back foot but it will interesting to see how the test match will unfold. We have seen Australia win the first test with in an hour. Both the teams are trying their best to get their hold on the proceedings.

Australia are at advantage with both Steve Smith and Marnus Labuschagne looking solid with their batting. Indian bowlers need to find a way to break this pair. Australia are batting at 159/2 at the time of writing and are in cruise control over the proceedings.