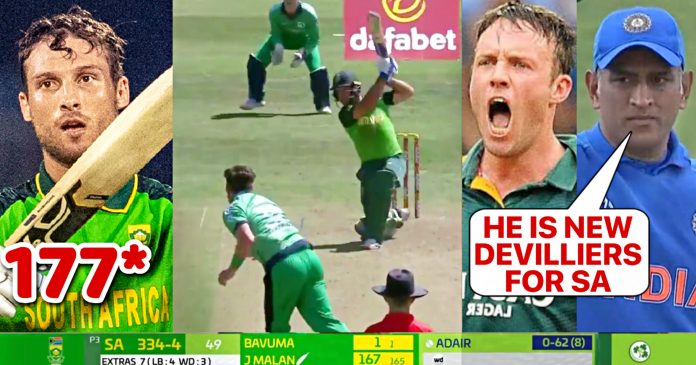 25 year old South African opener Janneman Malan smashed a record 177* against Ireland to power his side to 346-4. The Proteas had lost the last match to hosts Ireland in an incredible upset. Moreover that was South Africa’s first loss to Ireland in an ODI game. Hence the tourists came out with intent and smashed the Irish to all parts of the park.

Winning the toss, South Africa elected to bat first. The openers Quinton De Kock and Janneman Malan added a record breaking 225 runs for the first wicket. It was a carnage from the duo as they caned the Irish mercilessly. At one stage it looked that the tourists would cross 350 easily. However there was a continous fall of wickets once De Kock fell.

Great start for the Proteas!

The left handed keeper batsman cracked a 91 ball 120. It included 5 huge sixes and 11 fours. Russie Van Der Dussen chipped in with 28 ball 30 and provided further impetus to South Africa. In the meantime Malan kept scoring runs at will. He reached his 50 off 66 balls with 5 fours and a six.

Mark Adair and George Dockrell were the bowlers who received maximum punishment. While the former was carted around for 74 runs in 9 overs, the latter was slammed for 36 runs in 3 overs. Josh Little was the most successful bowler for his team as he took 2 wickets. Further more he gave just 53 runs in 9 overs.

Talking about stats, this is the second highest individual score by a South African in an ODI. He just missed out beating Gary Kirsten’s 188* that came way back in 1996 world cup.

Watch : Batsman hits 6 sixes in one over in European Cricket League

IND vs AUS: BCCI Release Playing XI For The First Test At Adelaide