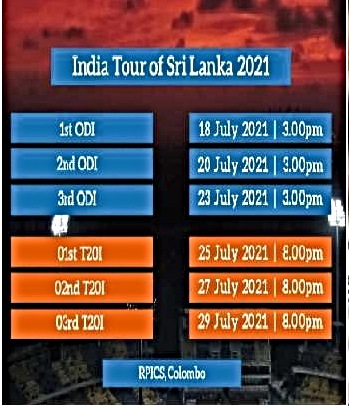 The India vs Sri Lanka limited overs series is all set to start at a new date later this month. Both the Sri Lankan batting coach Grant Flower and their team analyst GT Niroshan were found COVID positive. Hence the Sri Lankan board decided to postpone the series for a later date.

Furthermore the coach and analyst had become COVID positive with the delta variant. It is much more dangerous variant of the virus. Consequently both of them were immediately shifted to isolation room.

Fortunately for both the teams, none of the Sri Lankan cricket players were found COVID positive in re-test of RTPCRs. Hence the SLC (Sri Lanka Cricket found it safe to schedule the series from new dates and new timings.

Both teams mutually agree for the new dates and timings

The BCCI secratary Jay Shah briefed about the developments in a media release. It said :

“We understand that circumstances are extraordinary. The BCCI would like to extend its full support to Sri Lanka Cricket (SLC) during these tough times for the smooth conduct of the upcoming series. Our medical team is in constant touch with the team of doctors at SLC and together following all safety protocols. It will help the series to get underway. We are confident that both nations will put up a spirited show in the days to come and we are in for some exciting cricket.”

Moreover all the matches were originally scheduled to start from 2:30 PM. It has now been re scheduled to begin from 3 PM. Furthermore all the six matches of this tour will be played in Colombo at R Premadasa Stadium.

Watch MI Need 16 Runs in 6 Balls Then See How Pollard Win The...