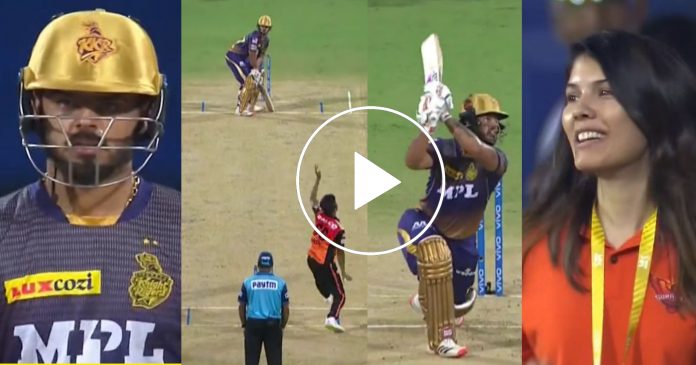 Kolkata Knight Riders are, playing against Sunrisers Hyderabad in Chidambaram stadium, Chennai. Hyderabad won the toss and, decided to bowl first. Considering, the dew available at night in the second innings, it was a straight forward decision.

The openers of Kolkata, Nitish Rana and Shubhman Gill started, on an aggressive note. Consequently, the duo added 50 runs in just 5.4 overs and gave, their team a rapid start. To counter the aggressive openers, Warner brought his trump card Rashid Khan. Moreover, the leg spinner from Afghanistan, delivered instantly as he clean bowled Shubhman Gill on, the last ball of this over.

However, Nitish Rana continued to hit his way for runs. After starting the innings with a boundary, he struck two boundaries in the next over of Sandeep Sharma. In the fourth over, Rana absolutely nailed Sharma. He carved him for three successive fours, in the first three balls of the over.

The first one was drilled, over covers for four. Second ball was again, smashed for a four through the cover point region. Also, the third ball met with the same result, as it was flayed through square leg, for third successive boundary of the over.

Nitish Rana’s first six came, in the 10th over. He thumped Vijay Shankar for a six, over mid wicket. It was a venom less short, delivery that was punished by Rana. Also, with the shot, he completed his fifty. The batsman took 37 balls, to achieve the feat. T Natarajan in the next over too, went the same way.

Last ball of his over, was hooked over fine leg by Rana, as he looked to increase the pace of the innings. Additionally, his third six came in the next over of Mohammad Nabi, when then southpaw lined him as he slogged him, over mid wicket for a six. Futher, Rana did not stop there. Then, Sandeep Sharma was again, on target of him after just 2 overs.

A low full toss was expertly, swept away for a flat six over square leg. After this, he got a bit tired and, his hitting tapered away a bit. Consequently, that proved, to be his downfall. In the death overs, the leftie tried to hit Mohammad Nabi, for a six again but instead, was caught at long off. Accordingly, Vijay Shankar completed the easiest, of catch for any fielder at long off.