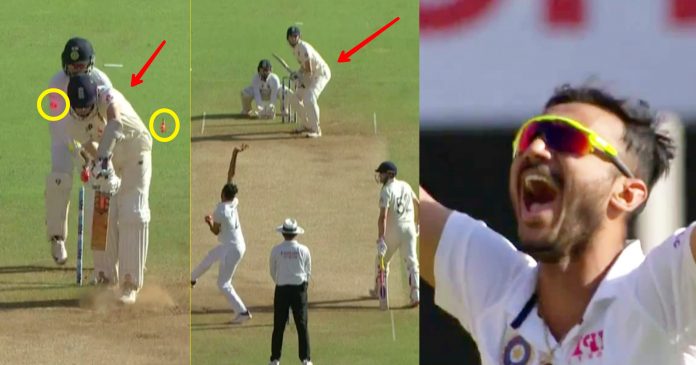 Axar Patel who is playing, just his second game of the career came, massively close to make history in the on going test match between England and India.

Earlier, India were bundled out for a pathetic 145. Joe Root, the English skipper picked up a fifer for just 8 runs as the Indian team were shot out without taking a big lead. The lead they managed was just 33.

In reply to this, England started their second innings on a sombre note in front of Axar. The opener Zak Crawley who scored a 50 in the first innings was cleaned up first ball of the innings.

The next batsman was number three Jonny Bairstow. He was out for a duck in the first innings and was under pressure coming into this innings.

Axar meanwhile, was on a hat trick when Bairstow came to bat. That happened because the left arm spinner had struck with the last ball of England’s innings as they were out for 112. Axar was the man who dismissed the last Englishmen Ben Foakes.

Now he had set his sights on hat trick when Jonny Bairstow came to the crease. As soon as Axar delivered the ball to the batsmen, he crouched low and tried to sweep the ball. However, the batter got beaten by the pace of the ball and the ball, missed his attempted swipe and thudded into his pads.

The entire team appealed, alongside the fans sitting in the stadium. The umpire gave the batsmen as OUT!!!

Patel was seen wildly celebrating his hat trick with his team mates. However, the batsmen took a review, halting India’s celebrations. In the DRS, it was found that the ball had bounced a bit ,more than required and the decision was over turned as Not Out!

It came as bit of disappointment, to everyone present in the stadium, except the English supporters.

Axar had his revenge the very next ball. A quality delivery by him went through the defenses of Jonny Bairstow to dismiss the batsman. He, just like in the first innings was gone, for a duck as he registered a pair in the game.

Patel might have missed out, on a hat trick but by still picking up 2 wickets, on the first 3 balls of the over, he made sure no one would think too much about that.

Watch Sensational death over bowling by Jasprit Bumrah vs KKR

Watch Jos Buttler gets hit on face by Pat Cummins. Gets injured.